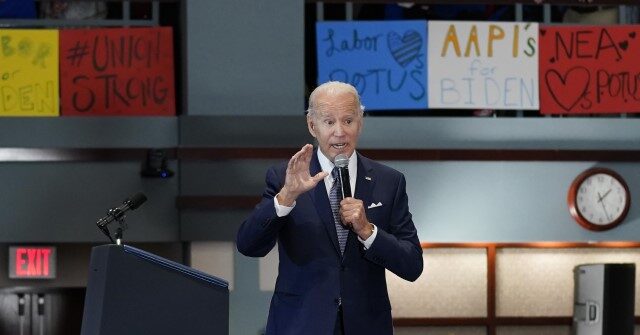 During a speech to a teachers’ union Friday, President Joe Biden admitted that AR-15s, AK-47s, and other guns Democrats call “assault weapons” are designed “to defend people.”

The Post Millennial published video showing Biden launch into the topic by asking, “What in God’s name do you need an assault weapon for?”

He then continued, “It’s an assault weapon designed to kill people, to defend America, to defend people.”

The Center for Security Policy’s Kyle Shideler reacted to Biden’s admission by tweeting, “Biden accidentally stumbles into the meaning of the 2nd amendment.”

Biden’s observations on the firearms which Democrats refer to as “assault weapons” comes just days after he told CBS News’ 60 Minutes that he will continue to push for a ban on such firearms.

During that interview he also told host Scott Pelley that the continued sale of semiautomatic weapons is “bizarre.”

AWR Hawkins is an award-winning Second Amendment columnist for Breitbart News and the writer/curator of Down Range with AWR Hawkins, a weekly newsletter focused on all things Second Amendment, also for Breitbart News. He is the political analyst for Armed American Radio and a Turning Point USA Ambassador. AWR Hawkins holds a PhD in Military History with a focus on the Vietnam War (brown water navy), U.S. Navy since Inception, the Civil War, and Early Modern Europe. Follow him on Instagram: @awr_hawkins. You can sign up to get Down Range at breitbart.com/downrange. Reach him directly at awrhawkins@breitbart.com.