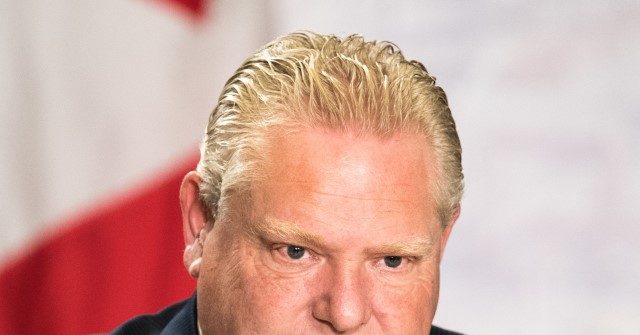 Ontario Premier Doug Ford said on Tuesday that his government will accelerate its timetable for lifting coronavirus restrictions, reopening businesses, and terminating its vaccine passport system.

“The world’s done with it, so let’s just move forward,” he said of the pandemic.

Like other Canadian politicians, Ford insisted his enthusiasm for lifting pandemic restrictions was not a result of the massive Freedom Convoy protests.

The Globe and Mail quoted Ford portraying himself as a longtime skeptic of harsh mandates who has been very quietly chomping at the bit to get rid of them:

Mr. Ford said Tuesday that he was “never sold” on the proof-of-vaccination policy, but that he introduced it on the advice of the province’s Chief Medical Officer, Dr. Kieran Moore.

“Dr. Moore’s phenomenal, but you know something he’s reasonable, too. He’s reasonable, he gets it, he understands the economy,” Mr. Ford said. “Thank God, on March 1, we’re moving forward out of this … I just can’t wait.”

Dr. Moore has said that masks should be required in Ontario for a bit longer. The province has not yet set a date to end its mask mandate covering public spaces, but Mr. Ford indicated on Tuesday that he wants to end that policy as well, saying that people want to “get back to normal” without such rules.

Ford declared his support for the right of Canadians to decline vaccination, and noted vaccinated people are still contracting the coronavirus, although they tend to experience milder symptoms.

The Globe and Mail cheekily noted that Alberta and Saskatchewan are “moving even faster” to dump coronavirus restrictions than Ontario, “a domino effect that began not long after protests against vaccination rules and government shutdowns started disrupting cities and border points across the country.”

Ford was also one of the premiers most supportive of leftist Prime Minister Justin Trudeau’s controversial invocation of emergency powers on Monday, having declared his own state of emergency three days earlier. This makes for an interesting combination with Ford’s revelation that he wanted the same things as the Freedom Convoy demonstrators all along.

Fox News zeroed in on Ford demanding a crackdown on the Freedom Convoy while talking as if he is on the verge of joining it:

“There’s rabble rousers, and there are just hard-working people that just don’t believe in it, and that’s their choice,” Ford said Tuesday of Canadians protesting the country’s vaccine mandates. “This is about democracy and freedoms and liberties. I hate as a government telling anyone what to do, we just have to get out of this and move forward and protect the jobs.”

… On the topic of vaccines, Ford said that regardless of how many boosters a person receives, they can still be infected with [Chinese coronavirus].

“We also know that it doesn’t matter if you have one shot or 10 shots, you can still catch COVID-19,” he said. “You see the prime minister, he has triple shots, and I know hundreds of people with three shots, who caught [Chinese coronavirus], we just need to be careful, always make sure we wash our hands and move forward.”

Ford lamented on Tuesday that he has “never seen this country and this province so divided.”

Ford was obliquely referring to his public differences with his daughter Krista Ford Haynes, a Freedom Convoy supporter and energetic social media critic of vaccine mandates, mask mandates, and other pandemic restrictions.