The United Arab Emirates’ top diplomat on Tuesday asked his Israeli counterpart to move quickly to set up embassies in Tel Aviv and Abu Dhabi. His plea came as a delegation of Emirati officials visited Israel for their first official state visit since signing a U.S.-brokered normalization deal last month.

“I have full faith in your unreserved support for opening diplomatic missions in Tel Aviv and Abu Dhabi as quickly as possible,” Abdullah bin Zayed al-Nahyan (pictured) wrote in a letter to Gabi Ashkenazi that was presented to the Israeli foreign minister by members of the UAE delegation.

“Best wishes to both countries and both friendly nations for progress and prosperity in the future,” Bin Zayed wrote in Arabic.

The UAE, the U.S. and Israel sent out a joint statement earlier in the day announcing the establishment of a $3 billion regional development fund based in Jerusalem.

The so-called Abraham Fund will “promote regional economic cooperation and prosperity in the Middle East and beyond,” the statement said.

“The fund will enable its members to launch people-focused investments, providing opportunity and hope for the region and its youth by enabling them to build a future that serves them and their communities,” the statement read.

“The partners welcome participation from other countries to advance these objectives.”

“The Abraham Fund will tackle challenges facing the region and increase economic opportunity for everyone,” Adam Boehler, CEO of the U.S. International Development Finance Corporation, said in the statement. “We are excited to take this historic partnership to the next level to promote shared prosperity.”

“Welcome to Israel,” Netanyahu said. “Today we are making history in a way that will stand for generations.”

“The enthusiasm for this agreement among our peoples is enormous and reflects the potential that is being realized today,” he said.

The UAE delegation,  signed four bilateral agreements with Israel, that the Israeli prime minister said would make “a tangible difference for our peoples.”

The two countries signed a visa waiver agreement that would allow for travel without a visa, the first of its kind between Israel and an Arab state.

“The visit of such a high-level delegation from the UAE, and the agreements we are about to sign, will show our peoples, the region and the entire world the benefit of having friendly, peaceful, normal exchanges,” Netanyahu said. “I believe that more and more governments across the Middle East understand, as we do here today, that we’re so much better off working together, as friends.”

Exciting that we keep getting to make these! First UAE delegation to Israel 🇱 on @etihad (with Israelis, Emirates and Americans onboard) 🇺🇸🇱 w/ @AdamUSDFC pic.twitter.com/lZ6zrFHfMM

“We shall remember this day, a glorious day of peace,” he said.

Treasury Secretary Steven Mnuchin represented the Trump administration at the ceremony. “The Abraham Accord established direct economic ties between two of the Middle East’s most thriving and advanced economies. These ties create a tremendous foundation for economic growth, opportunity, innovation and prosperity,” he said.

“With greater economic prosperity comes stronger security. Along with the United States, Israel and the UAE share a similar outlook regarding threats and opportunities in the region.”

UAE Minister of State for Financial Affairs Obaid Humaid Al Tayer said he was looking forward to “capitalizing on both countries’ leadership and great opportunities ahead of us.” 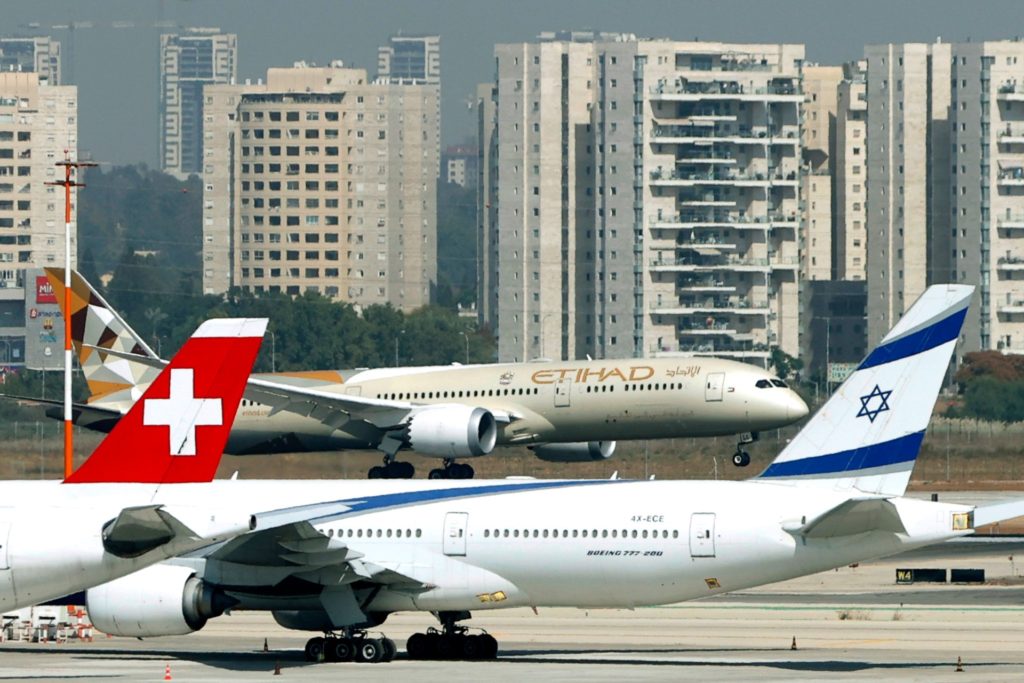 An Etihad Airways plane carrying a delegation from the United Arab Emirates (UAE) on a first official visit, lands at at Israel’s Ben Gurion Airport near Tel Aviv, on October 20, 2020. – The UAE delegation left on the country’s first official visit to Israel with a string of deals set to be signed after the two countries signed a deal to normalise ties last month. (JACK GUEZ/AFP via Getty Images)