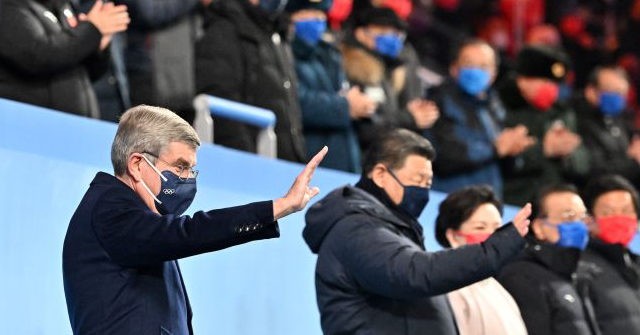 International Olympic Committee (IOC) President Thomas Bach celebrated successfully organizing the 2022 Beijing Winter Olympics on Thursday despite an ongoing genocide in the host country — condemning not the genocide, but those who oppose it for reviving “boycott ghosts” to threaten the event.

The Beijing Winter Olympics opened on Friday night local time to international outrage and disgust given the long list of human rights atrocities the Chinese Communist Party is currently responsible for.

Opponents of granting Beijing the honor of hosting duties once again note that repression of ethnic minorities, people of faith, and political dissidents increased exponentially after the capital city hosted the Summer Olympics in 2008, culminating in the current genocide of the Uyghur people of East Turkistan and similar ethnic cleansing policies in places like Tibet and Inner Mongolia.

The Hong Kong pro-democracy movement, suppressed by widespread police violence after the Chinese government unilaterally did away with the “One Country, Two Systems” autonomous policy, has also loudly protested the Olympics, urging viewers to boycott the event.

In addition to targeting the IOC, protesters have demanded that sponsors pull out of the Games and that NBC, the broadcaster with exclusive rights to the events in the United States, not air them. No sponsor has pulled out of the event, nor has any government boycotted the Olympics in protest of human rights abuses. NBC began its coverage – with effusive praise for China – on Friday.

The day before the Opening Ceremonies, Bach presided over the 139th session of the IOC. In his opening speech, the organization’s leader repeatedly thanked the Chinese “people” and government for working with the IOC and ensuring that the Games would begin on schedule.

Bach did not mention that China is currently engaging in the worst outbreak of Chinese coronavirus since the country birthed the current pandemic in 2019 but referred vaguely to various challenges threatening a successful Olympics session. He also praised China, which struggled to contain the virus and locked down millions of people in anticipation of the Games, for allegedly “highly effective” coronavirus mitigation efforts.

“Thanks to this meticulous preparation with the well-known Chinese efficiency and dynamism, the athletes are enjoying excellent and safe conditions,” Bach said.

In reality, over 100 people inside the Beijing Olympics “bubble” – the Olympic village no one is allowed to leave without regime permission – have tested positive for Chinese coronavirus, according to state media outlets this week. Beijing is currently home to the fastest-growing outbreak in the country, through metropolises like greater Shanghai, Tianjin, and Xi’an continue to endure at least partial lockdowns that have failed to contain the disease.

In his remarks on Thursday, Bach appeared to rank the threat of “politicization” – that is, the acknowledgment of gross human rights abuses in China – above the threats of Chinese coronavirus and police repression facing athletes in Beijing.

“You may remember that at our IOC Sessions in January and July 2020, we could already see the dark clouds of the growing politicization of sport on the horizon. We also saw that, in some people’s heads, the boycott ghosts of the past were rearing their ugly heads again,” Bach continued, referring to protests by the victims of Chinese communism and their allies.

Bach asserted that he and his officials had worked hard to persuade world leaders to ignore Chinese human rights abuses and honor Beijing as a legitimate host city anyway, a message he summarized as respecting “the precious mission of the Olympic Games.” He declared that, given the complete lack of government-led true boycott movements and the presence of thousands of athletes in Beijing, “this message got through.”

Bach’s triumphant tone over the complaints of human rights defenders was absent in his remarks at the Opening Ceremonies the next day.

“In this Olympic spirit of peace, I appeal to all political authorities across the world: observe your commitment to this Olympic Truce. Give peace a chance,” Bach declared from the capital of the world’s most prolific human rights abuser.

He did again, however, repeatedly thank the Chinese Communist Party.

“We can only write this new chapter in sporting history, because of our gracious hosts – the Chinese people, whom we thank wholeheartedly for welcoming us all so warmly. Thank you, our Chinese friends!” Bach proclaimed.