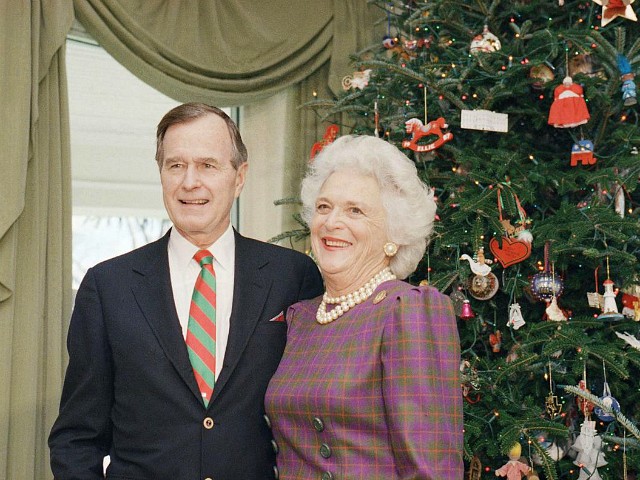 North said, “My guess is that the media — which hated George H. Bush just like it hates Donald Trump — wanted to portray him as something less than what he was. Let’s start with what he was. He was an American hero. I love to keep company with American heroes. That why I did 17 years at Fox. That’s what I do now as president of the NRA.”

North noted Bush’s role in the Chichi Jima incident, in which the former president was shot down as an airman in 1944 near Tokyo, Japan. Bush was the only survivor of nine airmen who had escaped their disabled aircraft.

“Everybody knows about the events of World War II,” stated North:

Twice [George H. W. Bush] went in the water, when his airplane was shot down, lost his other two crew members, they were dead in the aircraft. He parachuted out [and] was rescued by a submarine. Distinguished Flying Cross from World War II. Extraordinary courage demonstrated by what was then the youngest pilot in the United States military.

North recalled a 1983 episode while he was a national security council member with then-Vice President Bush:

I went with [George. H. W. Bush] down to the inauguration of President Alfonsin in Buenos Aires, the first democratic election in Argentina in, I guess, 50 or 60 years. On the way back, he made a secret trip to El Salvador. Now, not a lot of folks listening to this radio show remember what El Salvador was like in those days, but it was under assault from a communist dictatorship next door from Nicaragua. The FSLN — which is a terrorist group — threatened the government every day, and there were right-wing death squads wandering all over the place. They were trying to get more help from the U.S. military.

This trip was made shortly — within a month — after Granada, and they kind of expected that the president would stop and give President Magaña in El Salvador maybe a wink and nod, and that we would send American troops down to help him in El Salvador, and that wasn’t the message, at all. The message was, “You guys better hold a democratic election.”

So he’s in the meeting with President Alfonsin at the presidential palace, and in come the 31 “commandantes” — as they called themselves — who are heading up these very brutal death squads. President Reagan had asked [George H. W. Bush] to meet with those guys, if it was possible. So President Magaña summons him to his palace, and he’s in a private meeting with Vice President Bush. A lot of people don’t know this, but [George H. W. Bush] spoke fluent Spanish, so he didn’t need an interpreter with President Magaña.

“There’s a fracas going on out in the hallway, and the fracas was caused by the head of the Secret Service detail and the chief of staff who were telling Ambassador Tony Motley — head of Latin American Affairs — and me that there was no way the vice president was going to be allowed to go into that room with those 31 armed men,” North continued. “The Secret Service detail chief and Chief of Staff Dan Murphy were both adamant about it. They were trying to lay down the law with Ambassador Motley. It got o noisy that the [George H. W. Bush] stepped out of the room and said, ‘What the heck’s going on?’ His detail chief and his chief of staff explained to him that they did not want him to go into that room with 31 armed men and only two Secret Service agents.”

The vice president looked at them and said, ‘I told them I was going to go in there. I’m going in there, and you’re not going to stop me.’ He went back in and finished his meeting with President Magaña, came out, took off his jacket so they could see he wasn’t wearing a vest or carrying a sidearm, walked into that meeting and laid down the law that if they didn’t hold the election as was scheduled in a matter of months, then the United States was going to cut them off at the knees.

In other words, he was using the military assistance as leverage. At the end of the day, it worked. I don’t know whether they intended to do something, or not, but they were awed by this man’s courage, and it changed the direction of all that was happening in that country, and brought forth a democratic election.

North concluded, “The end result was the beginning of the democratic process that eventually swept all across Central America to include even removing the Sandinistas from power. That one example of his continued courage gave the lie to this story that was being told by the press that he was a wimp. I remember during the election, that’s the way to so-called mainstream media was describing him.”

North explained, “The mainstream media is not only biased by what they tell us and what they don’t tell us. They’re also practitioners of revisionist history. … George Herbert Walker Bush today is being portrayed as a moderate guy and wonderful get-along-with-everybody kind of person. The fact is, he was a very tough guy.

North remarked, “The bias in the press is so powerful, not just in what they tell us but in what they don’t. … I was on trial, the indictment was on March 18, 1988 all the way through 1992, when it was finally dismissed at the Supreme Court, they said, ‘Throw it out,’ and all the charges were dismissed, and we got to go home free men.”

The jury in my trial — which you never saw in any newspaper [or] on television; nobody ever mentioned it, the press was there every single day, the jury was seated every day — was an all-black jury. Now, I got a fair trial. I’m not arguing that, except only that there was evidence they should never have used, but the press never reported that.

Can you imagine what would happen today if a black man was tried by an all-white jury somewhere? Every day that would be pointed out and yet the media, truly, by not telling the American people what was going on in that courtroom tried to change the perspective on it. They never once mentioned that it was a white boy on trial in front of an all-black jury.

North added, “Now, I think the jury did a fine job. I went in on 23 or so counts in the indictment. I was convicted on three — eventually, they were thrown out. But the bottom line of it is, the media is not only biased in what they tell us and the way in which they tell it to us. They’re also biased in what they don’t tell people.”

Marlow said, “The public can only grasp a certain number of topics no any given day, and this is a huge point your making. Lying by omission is the best trick the media has, choosing to emphasize and de-emphasize stories … kind of reversing things to set an agenda. That is their trick. That is their parlor trick, and it’s important to identify it.”

North described Bush as gracious: “By December of 1986, Admiral John Poindexter and I were treated like we were radioactive. We had both been set back in the Pentagon …. and Vice President Bush picked up the phone and called the admiral and me personally. He didn’t have some staff secretary or aide or staffer do it, he did it, and invited us both to the Bush family Christmas at the Bush family’s residence. It was stunning. There was nobody in Washington who would do that. It was like we had Ebola [and] were quarantined. It was a wonderful evening.”