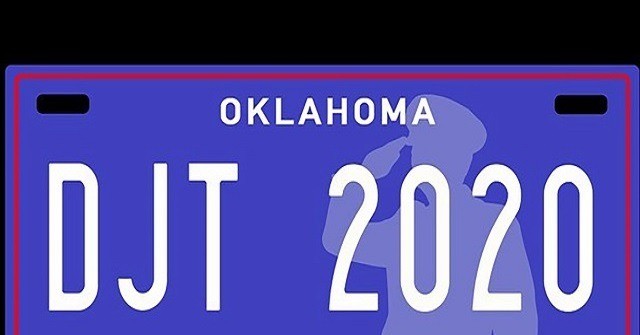 “Proceeds from them would go to 2 veterans groups here in Oklahoma: Folds of Honor & Warriors for Freedom Foundation.”

Pages 47 and 48 of Senate Bill1384 said of the proposed license plates:

Make America Great Again License Plate – such plates shall be designed and issued to any person wishing to demonstrate support for the proclamation made by Donald J. Trump to “Make America Great Again”. The license plates shall be designed in consultation with the corporation or entity designated by Donald J. Trump for such purposes.

The Tax Commission shall be authorized to enter into a licensing agreement with the corporation or entity designated by Donald J. Trump for such purposes for any licensing fees which may be required in order to use the organization’s logo or design.

However, Columbia Law School professor Richard Briffault said the idea could be problematic because it might violate Federal Election Commission rules.

“These are political slogans,” he said. “This has the look and feel of using state resources to support a political candidate, which seems improper . . . and possibly illegal.”

The Warriors for Freedom Foundation’s mission is to “connect service members, veterans, and their families with resources needed to become united with the community again,” according to its website.

Additionally, the Folds of Honor Foundation’s website stated that its purpose was to “provide educational scholarships to spouses and children of America’s fallen and disabled service-members.”

If passed, the bill would need Gov. Kevin Stitt’s signature before it could take effect November 1, according to the New York Post.