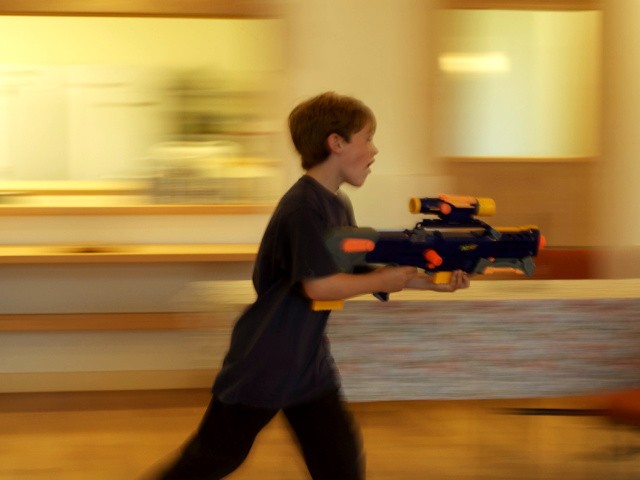 An Ohio performing arts center advertised a child’s birthday party package where kids could play a game with Nerf guns called “Shoot the President,” causing a stir among community members.

The Olmsted Performing Arts community center in Berea, Ohio, had recently placed an advertisement on its website for a Nerf gun party with an option to play a game called “Shoot the President.”

“There is one president with bodyguards. Everyone else tries to eliminate or shoot the president,” the party’s description stated.

But some community members shared concerns that the game’s theme could be sending kids the wrong message.

“I think it’s unfortunate that they chose that kind of theme only because of the atmosphere we are living in now,” Julie Berghaus, of Cleveland, told Fox 8.

“For kids, it’s just fun, but they don’t realize what they are being taught subconsciously,” added Berghaus.

Others dismissed the theme as nothing more than a “made-up” game.

“I wouldn’t say it was anything political or a statement about politics. I think the game was made up just for kid fun,” said Samuel Fravel, a former participant in one of the center’s educational programs.

The community center noticed the attention surrounding the game’s description soon after news outlets reported on it.

Adam Sheldon, the director of the Baldwin Wallace Community Arts School in charge of the center, said the facility was undergoing a transition phase where all parties with Nerf guns would be phased out.

“We apologize for the description on the website that is currently undergoing renovation. It’s not something that will be present for sure,” said Sheldon.

The community center’s website scrubbed the description of the offending game and the entire section advertising Nerf gun parties for children as of Saturday afternoon.