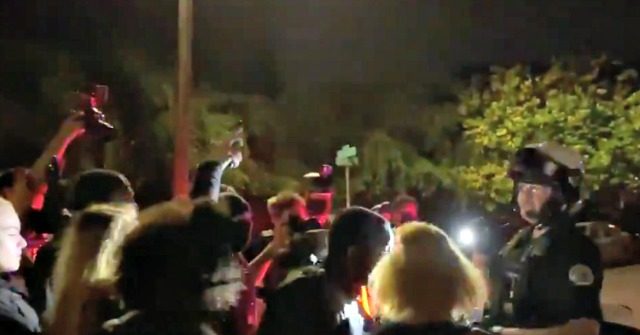 “The gathering of more than 100 people started at Laurelhurst Park and the group began to march down East Burnside Street at around 9 p.m., police said, proceeding towards the Penumbra Kelly Building at 4735 E. Burnside St.,” according to KATU.

Officers warned that any movement should be on the sidewalks and told them to follow traffic control devices, the report stated.

In a tweet just after 11:00 p.m., the Portland Police Bureau (PPB) said the building and its property were closed:

“The Kelly Building has been the focus of several protests over the last four months, some declared unlawful assemblies and some declared riots,” according to the KATU report.

Around midnight, the crowd surrounded a traffic officer and allegedly threw objects at him, police said:

Due to the extreme danger of a hostile crowd, the officer slowly pulled his motorcycle forward to disengage, turning to avoid some people standing in his path. During the maneuver, a woman jumped on the front of the motorcycle and was pushed aside. The officer was uninjured.

Journalist Andy Ngô shared video footage of what appeared to be the moment the crowd surrounded the officer:

Watch what happened when BLM-antifa rioters in Portland jumped in front of an officer on a motorcycle to stop him from chasing a fleeing suspect. #PortlandRiots pic.twitter.com/CNOuxYpfTJ

The policeman repeatedly told the crowd to back up, but they continued to question why he pulled over a driver.

Moments later, the driver pulled away from the scene. As the crowd cheered, the officer mounted his motorcycle and began to move forward when the woman stepped in front of him.

The woman refused medical attention and officers later took her into custody near the Kelly building, according to the PPB.

“The fourth suspect arrested was treated and released from the hospital and booked into the Multnomah County Detention Center. Tealeanna Lindseth, 22, unknown residence, Riot, Interfering with a Peace Officer (2 counts) and Disorderly Conduct in the Second Degree (2 counts),” the release said.