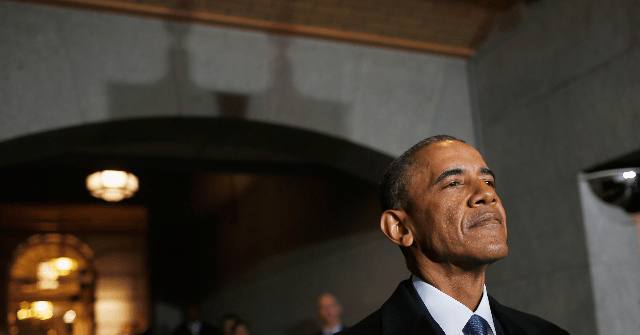 Democrats and media mouthpieces denounced the Betsy Ross flag this week but failed to realize the recent history surrounding one of the nation’s most patriotic symbols.

What they forgot to mention was that the Revolutionary War era flag was prominently displayed at the United States Capitol during former President Barack Obama’s second inauguration ceremony in 2013.

Democrats running for president have officially lost it.

Beto & Castro strongly imply that the Betsy Ross flag is a symbol of hatred. Do the rest of the Dems agree?

“Weird that no one had a problem with The Betsy Ross Flag when it flew over Obama’s inauguration. Now it’s not patriotic… ok got it,” tweeted Donald Trump Jr. on Wednesday, along with a picture of the 2013 ceremony that shows the flag in the background.

Former NFL quarterback Colin Kaepernick, who endorses Nike, reportedly contacted the company when photos of the shoes bearing the symbol were posted online, saying the flag was offensive because of its ties to an era in our history when slavery was legal.

Nike defended their decision to pull the shoe in a statement issued Tuesday, Breitbart News reported.

“We regularly make business decisions to withdraw initiatives, products and services,” the statement read. “Nike made the decision to halt distribution of the Air Max 1 Quick Strike Fourth of July based on concerns that it could unintentionally offend and detract from the nation’s patriotic holiday.”

However, President Trump praised American greatness and listed our nation’s heroes, including Betsy Ross, during a speech at the “Salute to America” July 4th celebration on Thursday.

“As long as we stay true to our course, as long as we remember our great history, as long as we never, ever stop fighting for a better future, then there will be nothing that America cannot do,” the president concluded.