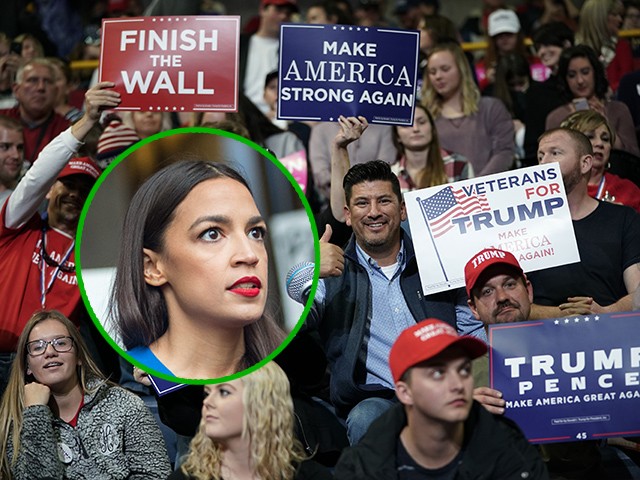 In an interview with MSNBC’s Rachel Maddow, Ocasio-Cortez accused President Trump of holding the paychecks of furloughed government workers “hostage” to build a wall on the U.S.-Mexico border, a proposal the self-avowed Democrat-socialist described as a “campaign fantasy.”

“In the actual address, there was falsehood after falsehood and we have to make sure that we get our facts straight. Everyday immigrants commit crimes at a far lower rate than native-born Americans,” Ocasio-Cortez said. “And not only that but the women and children on that border that are trying to seek refuge and seek opportunity in the United States of America with nothing but the shirt on their backs are acting more American than any person who seeks to keep them out ever will be.”

Rep. Alexandria Ocasio-Cortez on the shutdown and Trump’s address: “The women and children on the border seeking refuge and opportunity in the U.S. with nothing but the shirt on their backs are acting more American than any person who seeks to keep them out ever will be.” pic.twitter.com/VrJcEEmyLW

The freshman congresswoman alleged, without citing any evidence, that the president has a “proven track record of discrimination against anybody who’s really non-white,” saying that “insane amount of dysfunction” has caused Americans to feel “unsafe.”

“No one should feel unsafe in the United States of America and that includes our amazing and beautiful and productive immigrant community. And moreover, the one thing that the president has not talked about is the fact that he has systematically engaged in the violation of international human rights on our border,” she continued. “He has separated children from their families.”

In his prime-time remarks, President Trump urged congressional Democrats to fund a border wall, stating that it is needed to resolve a humanitarian “crisis,” blaming illegal immigration for what he said was a scourge of drugs and violence in the U.S.

“How much more American blood must we shed before Congress does its job?” he asked.

President Trump plans a visit to the border Thursday as he continues to pitch what was a signature promise of his 2016 presidential campaign.