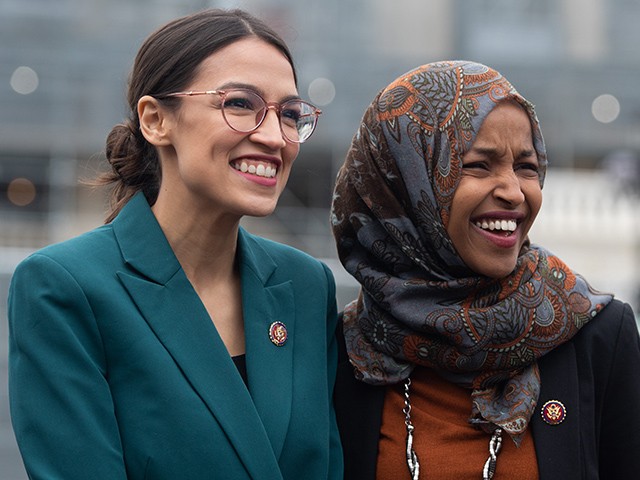 “@IlhanMN is a Somali refugee. She has felt the ravages of war,” Ocasio-Cortez wrote on Twitter. “watching her question Trump’s envoy to VZ, who pled guilty to several Iran-Contra crimes, feels like justice.”

I often reflect on @AyannaPressley‘s words: “people closest to the pain should be closest to the power.”@IlhanMN is a Somali refugee. She has felt the ravages of war. Watching her question Trump’s envoy to VZ, who pled guilty to several Iran-Contra crimes, feels like justice. https://t.co/3mFv0lmAis

On Wednesday, Omar clashed with Abrams, who she mistakenly called “Mr. Adams,” accusing the State Department official of characterizing “massacre” and “rape” during the El Salvador civil war a “fabulous” U.S. accomplishment — a claim he strongly denied.

“I don’t understand why members of this committee or the American people should find any testimony that you give today to be truthful,” the Minnesota Democrat said of Abrams, who she noted pleaded guilty to withholding information from Congress as part of the Iran-Contra investigation in 1991.

“You later said that the U.S. policy in El Salvador was a fabulous achievement. Do you still think so?” she asked.

“I am not going to respond to that question,” Abrams replied. “I’m sorry. I don’t think this entire line of questioning is meant to be real questions, and so I will not reply.”

Omar then suggested Abrams would “support an armed faction within Venezuela that engages in war crimes, crimes against humanity, or genocide” if it advanced U.S interests. “I am not going to respond to that question,” Abrams shot back at the lawmaker. “The entire thrust of American policy in Venezuela is to support the Venezuelan people’s effort to restore democracy to their country,” he added.

Abrams, who served as the Assistant Secretary of State for Inter-American Affairs under President Ronald Reagan, was appointed the special envoy for Venezuela in January after the country held a disputed election.

“Anti-Semitism is real and I am grateful for Jewish allies and colleagues who are educating me on the painful history of anti-Semitic tropes. My intention is never to offend my constituents or Jewish Americans as a whole,” the Minnesota Democrat claimed in a statement. “We have to always be willing to step back and think through criticism, just as I expect people to hear me when others attack me for my identity. This is why I unequivocally apologize.”

Omar then went on to criticize AIPAC once more, calling their so-called “role” in American politics “problematic.”

Asked about antisemitic statements made by Omar and Rep. Rashida Tlaib (D-MI), Hoyer replied, “Congresswoman Omar apologized,” adding that “the real test is the actions on the floor.”

“We need to treat one another with respect and without language that would refer to any kind of interpretation of bigotry, prejudice, or hate,” he continued. “We’ll continue to pursue and advocate for that, and very frankly, if that doesn’t pan out, there may be further action we would take.”