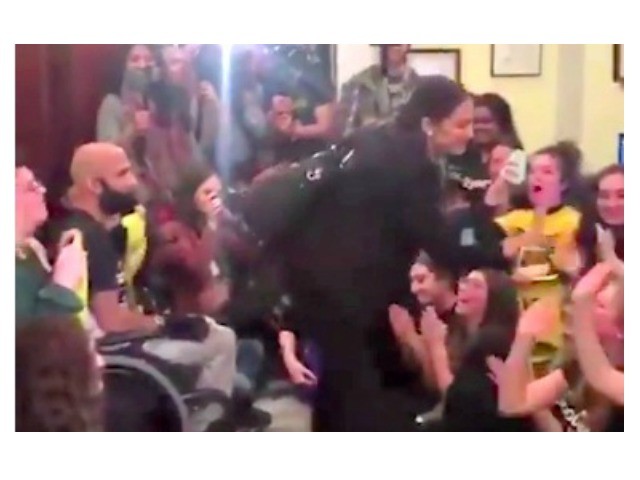 Rep.-elect Alexandria Ocasio Cortez joined more than 200 youth activists in storming the office of House Minority Leader Nancy Pelosi Tuesday morning in order to get her to act on climate change.

Capitol police stated 51 protesters had been arrested after unlawfully demonstrating outside Pelosi’s office in the Cannon House Office Building. Police began making arrests when the protestors refused to leave the area after a few hours of demonstration.

Ocasio-Cortez departed before arrests were made. However, she briefly spoke to the group of activists at Pelosi’s office.

“I just want to let you all know how proud I am of each and every single one of you for putting yourselves and your body, and everything on the line to make sure we save our planet, our generation, and our future,” Ocasio-Cortez told the young activists. “It’s so incredibly important.”

Pelosi embraced the protesters and said she planned on launching a special committee to focus on the climate crisis. Pelosi said in a statement:

We are inspired by the energy and activism of the many young activists and advocates leading the way on the climate crisis, which threatens the health, economic security and futures of all our communities. I have recommended to my House Democratic colleagues that we reinstate a select committee to address the climate crisis. House Democrats ran on and won on our bold campaign for a $1 trillion investment in our infrastructure that will make our communities more resilient to the climate crisis, while creating 16 million new good-paying jobs across the country.

As of now, it remains unclear whether or not Ocasio-Cortez will support Pelosi’s bid for House speaker.

At 29, Ocasio-Cortez will be the youngest woman to assume office as a member of the United States House of Representatives in January.