Ocasio-Cortez took to the microphone to fight for the rights of those immigrating here illegally.

“This is one of the most urgent moral issues and crises that we have in America right now,” Ocasio-Cortez said to a small crowd of people and reporters gathered outside of the U.S. Capitol. “This is not a political issue. Children dying in detention centers should not be a partisan concern. It should be a universal concern for every American in the United States.”

Ocasio-Cortez then insisted that President Trump was lying when he said he liked “legal immigration.”

“He said and spoke of the idea that he likes, quote-unquote, legal immigration. But that is a lie. The president does not like any form of immigration. He has been cutting down and imposing restrictions on legal forms, on the diversity visa lottery, on family unification, and so on.”

The New York freshman then stated that President Trump wants to “continue to militarize and weaponize” the Department of Homeland Security and Immigration and Customs Enforcement (ICE) by requesting additional funding. She also stated that Homeland Security Secretary Kirstjen Nielsen “has no idea when she goes in front of a hearing how many children are dying in her own care, under her own watch.”

“We’re here to say that an agency like ICE, which repeatedly and systematically violates human rights, does not deserve a dime,” Ocasio-Cortez stated.

Ocasio-Cortez, who has received widespread attention for her proposal to impose a 70 percent tax rate on the wealthy to fund her climate change plan called the “Green New Deal,” also claimed that ICE should not receive funding for its “radical agenda” until it decides to “embrace immigrants.”

Ocasio-Cortez, whom a Getty Images photographer captured crying, then made her case for those immigrating here illegally and pointed out that we are a nation of laws: 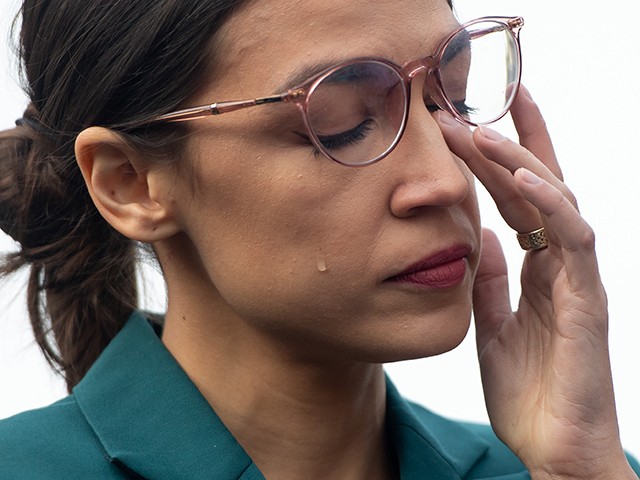 US Representative Alexandria Ocasio-Cortez, Democrat of New York, sheds a tear during a press conference calling on Congress to cut funding for US Immigration and Customs Enforcement (ICE) and to defund border detention facilities, outside the US Capitol in Washington, DC, February 7, 2019. (Photo by SAUL LOEB / AFP) (Photo credit should read SAUL LOEB/AFP/Getty Images)

“We are a nation and land of laws. Not just some people are subject to laws and others are not,” Ocasio-Cortez claimed. “When we are a land of laws, what that means is that every person that steps foot on this soil deserves the consideration of due process. They deserve the protections. They deserve to have access to our Bill of Rights. That’s what makes this nation special.”

Rep. Omar then took to the mic to echo Ocasio-Cortez’s plea to cut funding for the DHS.

“We need to feel the pain and the struggle, the hopes, and dreams of the people who this president likes to demonize,” Omar said, adding:

For many of these families coming to our border, they are leaving situations where it is safer for them to risk starvation, to risk possible rape, to risk possible death because they know the smallest hope of survival is much more bigger and better than just standing still and waiting, waiting to not have a new opportunity to start anew.

Rep. Omar, who has been criticized for her anti-Semitic views, then correlated her own situation in coming to America with that which she claims children are facing today.

“I cry every time I see a little girl standing in the desert waiting to get processed into this country because I remember what that felt like,” Omar stated. She continued:

But the difference between what is happening to some of these little girls and me is that I didn’t, I didn’t, have a cage waiting for me. I had an open arm, people with a moral clarity, awaiting us, saying, “You’ve been through a lot. Here is your new home. You’re our new neighbor. You need water and you need food.”

Omar then claimed those immigrating here illegally are “detained and tortured.”

“In the United States, people are not welcomed that way. They are separated and processed, they are detained and tortured, and we can’t continue to allow it to happen, at least not under our watch.”

Omar then went on the attack of the Trump administration and claimed that they only “see dollars.”

“They don’t see people. They see dollars. They see campaigns. They see cheers. They see rallies,” Omar claimed. “We see humans because most of us have been invisible in our communities.”

Rep. Tlaib spoke briefly after Omar and also called for a cut to DHS funds as she broke into tears.

“I’m really tired of us sitting back and saying, ‘Well, we gotta get the information.’ Guess what? We already know people died.” She went on, “That should be enough for us to act and to say that no more money towards an institution that is demonizing and criminalizing our immigrant neighbors. We don’t want a system that basically has taken away the core values of the American dream.”

Rep. Pressley stated that those in attendance at the event were there to “draw a line in the sand.”

“We are here to draw a line in the sand, in the name of love and in the name of justice,” Pressley said. “We have a task put before this institution to negotiate a DHS package in three weeks’ time. We have an obligation to make our workers whole, to prevent another road shutdown by this administration and to demonstrate moral leadership.”

“I ask my colleagues for their solidarity to enter into the DHS conference committee process with clarity. Time and again, this administration has put profits before people and rhetoric before the lives of immigrant children. It is clear that we must reduce and not increase funds for the DHS,” Pressley stated.