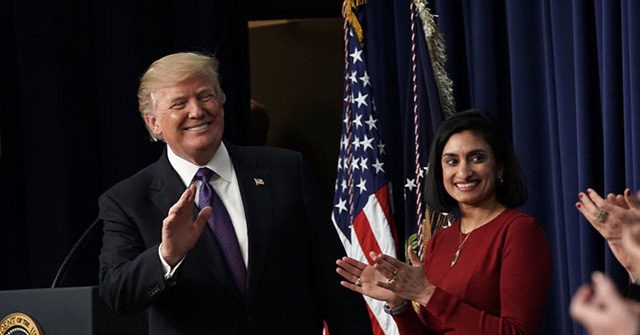 President Donald Trump has continued to fulfill his promise to lower health insurance premiums by lowering the Affordable Care Act (ACA) exchange premiums for the third year in a row.

The Centers for Medicare and Medicaid Services (CMS) announced on Monday that the average premium for the benchmark ACA plan, or the second-lowest costing silver plan, fell by two percent for the 2021 coverage year. The CMS also revealed that 22 more health insurers will offer coverage in 2021, which will increase health insurance competition and choice for patients.

CMS Administrator Seema Verma said that the president’s healthcare policies have led to more choices and lower costs in a statement on Monday.

“Bottom line – The President has delivered, lower cost and more choice,” Verma said. “Our changes to the regulations and how we have managed the Exchanges have proven to be more effective than previous administrations.”

The three years of declining premiums totaled to an eight percent decrease since the 2018 coverage year. Four states, Iowa, Maine, New Hampshire, and Wyoming, even saw double-digit decreases in premiums.

The CMS administration also approved waivers for Maine and New Hampshire to use a state-based reinsurance program to attribute to the decline of health insurance premiums on the ACA exchange.

“President Trump is fighting to ensure all Americans have access to the Health Care they need,” Verma said in a statement in October. “While premiums have stabilized, middle-class Americans can’t afford Obamacare’s expensive premiums.”