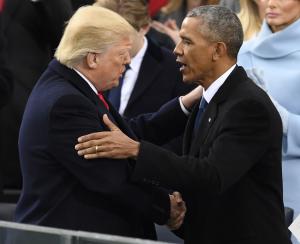 Former President Barack Obama said on Tuesday that he was “very confident” he would have won a third term had the Constitution and his wife allowed him to run again.

Speaking to his former top adviser David Axelrod at a live recording of the “The Axe Files” podcast at the University of Chicago, Obama said he believes voters felt that he had “taken the job seriously, worked hard, been true to my oath, observed and hopefully strengthened the norms and the rules and the values of our democracy.”

“I feel very confident that I was in a position—had it not been for both the Constitution and Michelle—to continue in office,” Obama said.

Axelrod had earlier said that some people would like Obama to serve in perpetuity and joked about some of Obama’s supporters even wanting him to run for vice president.

The former president, though, added that he is “not sure it is a healthy thing” to serve more than two terms, pointing out that in countries without term limits, “even very good people… lose their edge and get stale and comfortable in the position.”

Obama said it is “useful to have a democracy have to continually evolve.”

Had Obama been allowed to run for a third term, he would have faced off against Donald Trump in 2016. But when Axelrod asked whether Obama believed he could defeat President Trump in 2020 in a hypothetical one-on-one matchup, Obama did not take the bait.

“I will not answer that direct question for obvious reasons,” Obama said.