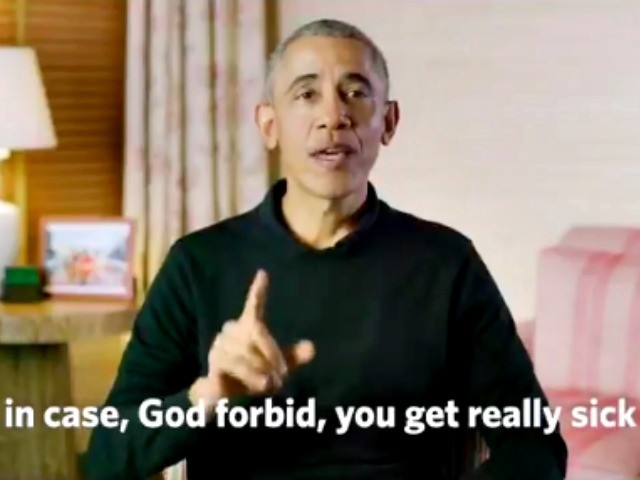 Despite his new residence outside of the White House and Congress’s partial dismantling of the Affordable Care Act, Barack Obama is asking people to sign up for government-run Obamacare health insurance in a video he posted on his Twitter account.

As the midnight Saturday deadline looms and enrollment lags by about 500,000 compared to last year, the former president is promoting his signature legislation and claiming premiums could be “less than your cell phone bill.”

“No jump shots. No ferns. No memes. Not this time. I’m going to give it to you straight: If you need health insurance for 2019, the deadline to get covered is December 15. Go to http://HealthCare.gov  today and pass this on — you just might save a life,” Obama tweeted with the video.

No jump shots. No ferns. No memes. Not this time. I’m going to give it to you straight: If you need health insurance for 2019, the deadline to get covered is December 15. Go to https://t.co/ob1Ynoesod today and pass this on — you just might save a life. pic.twitter.com/8mHMsXGY0g

In the video, Obama said his “team” usually tried to get him to do something that will “make a fool out of myself” but he said that this year he didn’t need to because “young people have stepped up like never before. On campuses. At the voting booth and at the doors of power. And, frankly, I think you’ve proven that you don’t need to see me taking jumps shots or sitting between a couple of forest plants in order to know it’s important to have health insurance.”

In fact, enrollment in Obamacare is falling, according to media reports.

Overall this year, enrollment in the individual market is moving more slowly than in previous years.

At the end of last week, just over 4.1 million people had chosen a health plan on Healthcare.gov, according to the Centers for Medicare and Medicaid Services, which runs the website. That’s about half a million fewer than at this time last year, an analysis by the advocacy group Protect Our Care shows.

The leftist, taxpayer-funded NPR sought to blame President Donald Trump for the decline in its reporting by interviewing Rosemarie Day, CEO of Day Health Strategies who was in charge of the Massachusetts state-run health insurance program.

“She blames the lower enrollment on the Trump Administration’s decision to slash the advertising budget for open enrollment,” NPR reported. “Outreach, she says, is crucial to making sure that people who need insurance know where and when to get it.”

The Associated Press (AP) reported that another Trump move may actually be responsible for the slide in enrollment.

“The new numbers suggest there may be less demand for government-subsidized insurance during a time of strong economic growth,” AP reported.

Also, Trump’s executive order ending the individual mandate part of Obamacare that gave the IRS authority to fine individuals who did not sign up for health insurance also has played a role in lower enrollment, according to AP.

In the video, Obama also claimed that Obamacare is not only affordable but inexpensive.

“Most folks can find coverage for $50 to $100 per month,” Obama said. “It’s probably less than your cell phone bill.”

But according to ehealthinsurance.com, data from the 2018 open enrollment period, from November 1 to December 15, 2017, the cost for people who did not receive a government subsidy in much more costly.

“Premiums for individual coverage averaged $440 per month while premiums for family plans averaged $1,168 per month,” the website states.

Also, those enrolled in Obamacare represent a small percentage of the more than 329 million Americans.