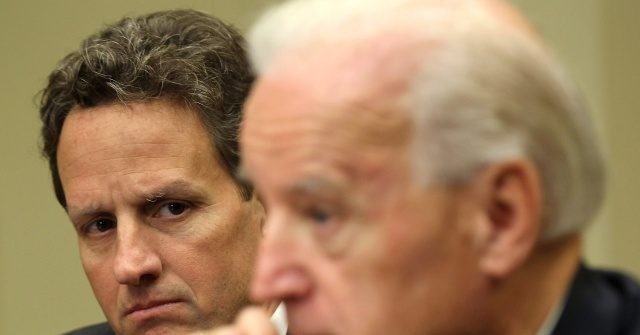 In 2009, as part of the Obama-Biden administration’s taxpayer-funded bailout of General Motors (GM), the Pension Benefit Guaranty Corporation (PBGC) terminated the pension plans of about 20,0000 non-unionized Delphi workers. In some cases, workers had their pensions gutted by as much as 75 percent.

A federal report in 2013 detailed that the Delphi workers would likely have their pensions cut by an estimated $440 million. Meanwhile, GM topped off unionized Delphi workers’ pensions at a cost of about $1 billion.

Trump officials have said the president is working on an executive plan to restore the Delphi pension after more than a decade of no help from the Obama administration.

A number of Obama officials directly involved with the auto bailout deal that slashed the pensions are now banking on a Biden victory on November 3 — pouring hundreds of thousands of dollars into the former vice president’s campaign with Sen. Kamala Harris (D-CA).

Among those officials involved in the deal were former Treasury Secretary Tim Geithner, who reportedly contributed $150,000 to the Biden Action Fund in August. As previously noted, emails in 2012 detailed how Geithner’s agency at the time “was the driving force behind terminating the pensions of 20,000 salaried retirees at the Delphi auto parts manufacturing company.”

Geithner was said to have delegated out responsibility for the Delphi pensions to a select team of Obama officials, though insiders have said he was pushed to help the workers but did not lift a finger.

Likewise, Obama official Steven Rattner has contributed a total of $5,600 to Biden’s campaign last year and this year. Rattner was at the center of the Delphi pensions slashing scheme, as noted in the 2013 federal report previously mentioned:

Auto Team leader Rattner told SIGTARP that GM came to the Auto Team because “GM wanted to do something for the [Delphi] salaried retirees.” Mr. Rattner discussed it with then-GM CEO Henderson. Although Mr. Rattner could not remember the specifics of the conversation, he told SIGTARP that he thought there was nothing defensible from a commercial standpoint that could be done for the Delphi salaried retirees. Mr. Rattner told SIGTARP, “We didn’t think there was anything defensible. We felt bad, but we didn’t think it was justifiable.” [Emphasis added]

Ron Bloom, another Obama official, has given $2,800 to Biden’s campaign. Bloom is named in the 2013 federal report regarding the Delphi pension slashing scheme, which notes his direct involvement:

Although Delphi salaried retirees had asked Auto Team official Bloom to consider preserving the pensions out of fairness, Auto Team official Bloom told SIGTARP that GM “did not provide a top-up to the salaried guys because I think [GM] concluded there was not a commercially reasonable reason to do it.” Mr. Bloom added that GM’s automotive parts suppliers “received a hundred cents on the dollar,” the UAW’s retirees received a number “less than a hundred, but more than the bondholders,” and some got less than the bondholders. Mr. Bloom told SIGTARP that they could not make everyone whole and “That’s not to say that people didn’t lose a lot or [were] hurt or were treated in a way that – sort of in a human way you would say that’s unfair. I don’t think that anybody thinks bankruptcy is fair. It is what it is, though.” [Emphasis added]

Matthew Feldman, who had potentially more involvement in the Delphi pension slashing scheme than any other Obama official aside from Rattner, has not made contributions to Biden. Members of Feldman’s firm, Willkie Farr & Gallagher, where he is co-chairman, have donated tens of thousands to Biden.

It is unclear how many Obama officials who are linked to the Delphi pension slashing scheme are eyeing jobs in a Biden White House should he win on November 3. Biden is considering a number of former Obama officials for top-level jobs, many under the mantle of “diversity.”

Delphi, which has since split into Aptiv and Delphi Technologies, announced in 2006 that it would shutter 21 of its 29 plants in the United States — offshoring some 20,000 U.S. jobs to Mexico, China, and other foreign countries.

At the time, Delphi employed nearly 50,000 Americans, who earned about $30 an hour on the assembly line. Now, workers in Mexico for the company earn about $1 an hour.