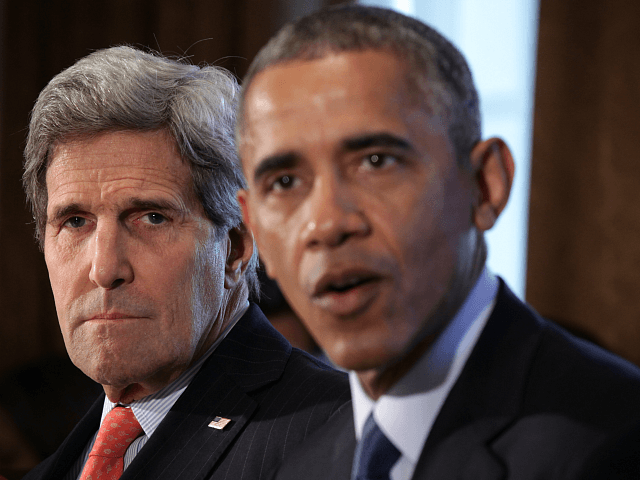 Former U.S. Secretary of State and Democrat presidential candidate John Kerry is in Northern Ireland threatening that Brexit could trigger a new terror campaign in the Province.

Kerry, who replaced Hillary Clinton as President Barack Obama’s foreign policy supremo in the wake of the Benghazi fiasco in 2012, offered his implicit support to Prime Minister Theresa May’s “worst deal in history” with the EU — which keeps the border between Northern Ireland and the Republic of Ireland open by surrendering large swathes of the former’s economy to EU control under a so-called “backstop” arrangement — in an interview with the BBC’s Sunday Politics Northern Ireland programme.

“Under the Stormont Agreement, the last 20 years have been characterised by a border which people have been able to cross easily,” said the 2004 presidential election loser.

“If you have a certain kind of Brexit with a hard border you could see great difficulties emerge as a consequence of that,” he claimed.

In an echo of President Obama’s threats about Britain being sent to “the back of the queue” for a trade deal with the United States in the event of a Leave vote — now utterly repudiated by the Donald Trump administration, which has put Brexit Britain “at the front of the line” — Kerry warned he had “concerns that depending on what kind of Brexit takes place it could have a negative impact on the progress made” in Northern Ireland.

“It could re-heat passions one way or the other or both depending on what it is. We have to see how this is going to be resolved. It’s imperative that it’s resolved in a way that it does not reignite the Troubles,” said Kerry, suggesting the Provisional Irish Republican Army (IRA) could easily recommence its long campaign of assassinations and terror bombings again British soldiers, police officers, politicians, and civilians — despite its claims to have disarmed as a result of the 20-year-old peace deal.

Wish @ChukaUmunna would stop using the Belfast agreement as reason to stay in Customs Union. Insulting to people in Northern Ireland and sends a signal to men of violence #noblackmailofdemocracy

A clear majority of Northern Ireland’s people endorsed the Union with Great Britain in a 1973 referendum, so suggestions that the British government should bow to EU demands on customs and regulation in order to appease any potential terrorists are controversial in the Province.

The idea that it could erupt into violence over something as trivial as customs checks has also been called into question by some, including Brexit-supporting Labour’s Kate Hoey, a London MP with Ulster roots.

“[I] wish Chuka Umunna would stop using the Belfast agreement as [a] reason the stay in the [EU] Customs Union,” she wrote in February 2018, after the Remain diehard made similar allusions to Kerry about Brexit undermining peace in the Province.

“[It is] insulting to people in Northern Ireland and sends a signal to men of violence,” she added, indicating that it was not helpful for Remainers to legitimise the idea of Irish nationalists carrying out attacks in response to Brexit.