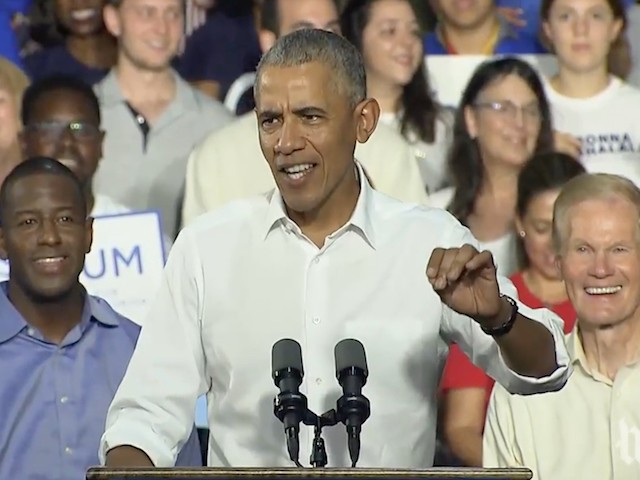 Obama said, “We all try to put a positive spin on things, but what we have not seen the way we are seeing right now is politicians just blatantly, repeatedly, baldly, shamelessly lie. Just making stuff up. That’s what they’re doing now all the time. By the way, it’s not the first time. They do this every election cycle. Try to terrify folks and then the election comes and problem suddenly magically vanishes. You never hear about it again. In 2010 they said Bill and I were setting up death panels to kill your grandma. Remember that? In 2014 they said Ebola is going to kill all of us, shut the borders. In 2016 it was Hillary’s emails. They were all wound up about that.”

He continued, “Now in 2018 they’re telling you the existential threat to America is a bunch of poor refugees a thousand miles away. They’re even taking our brave troops away from their families for a political stunt at the border. And the men and women of our military deserve better than that. So there’s just constant fear-mongering to distract from the record. Now the administration suddenly says we are doubling down on our outdated Cuba policy. Which all that does is hurt families and entrepreneurs who are trying to open up the Cuban economy. We need to get back to politics for the Cuban people. That’s what Bill believes in. That’s what Andrew believes in. The point is, Florida, they make stuff up, but the problem is, too often we fall for it. Too often we fall for the distractions. You know, y’all remember Peanuts right? Charlie Brown and Lucy with the ‘You can kick it,’ and Charlie Brown would say ‘okay,’ and then she would pull the ball away and he would fall on his back, but he kept on doing it every time. Don’t be Charlie Brown. Don’t fall for the okey doke. Don’t be bamboozled. Don’t be hoodwinked. Because when you get distracted, while you’re distracted with all this stuff they’re making up, they’re also robbing you blind. It will be like, look, look, look over there, and then they’re giving tax cuts to billionaires.”

He added, “It’s not just the practical effect of policy. When words stop meaning something, when truth doesn’t matter, when people can just lie with abandon, democracy can’t work.”