Johnson made his remarks after Sen. Cory Booker (D-NJ) on Tuesday vowed to “virtually eliminate immigrant detention” through executive orders. Booker introduced his immigration plan days after Julian Castro, the former San Antonio mayor who served as Obama’s Housing and Urban Development (HUD) secretary, had his breakout moment of the 2020 election cycle during the last week’s presidential debate when he called for Section 1325 of the U.S. immigration code to be eliminated so that illegal border crossings will be decriminalized.

“That is tantamount to declaring publicly that we have open borders,” Johnson told the Washington Post. “That is unworkable, unwise and does not have the support of a majority of American people or the Congress, and if we had such a policy, instead of 100,000 apprehensions a month, it will be multiples of that.”

Breitbart’s Brandon Darby’s exclusive photos of illegal immigrants being housed in warehouses in 2014 drove the worldwide news cycle for weeks, forced the establishment media to cover the migrant crisis, and contributed to then-House Majority Leader Eric Cantor’s (R-VA) shocking primary loss months later.  Democrats who were not outraged then, though, have suddenly decided in recent months, even after insisting that there was not a crisis as the border just months ago, to become outraged at migrants being warehoused by the Trump administration at various detention facilities.

Joaquin Castro’s migrant detention photo from yesterday on left vs my photo from 2014 on right. Why weren’t they mad then? Strange. pic.twitter.com/5NIFfFP1X0

When photos of Johnson touring detention centers during the Obama administration made the rounds on social media networks in recent weeks, Johnson reminded reporters that President Donald Trump did not build the warehousing facilities.

“Chain link barriers, partitions, fences, cages, whatever you want to call them, were not invented on January 20, 2017, okay?” Johnson reportedly said last Friday at the Aspen Ideas Festival. 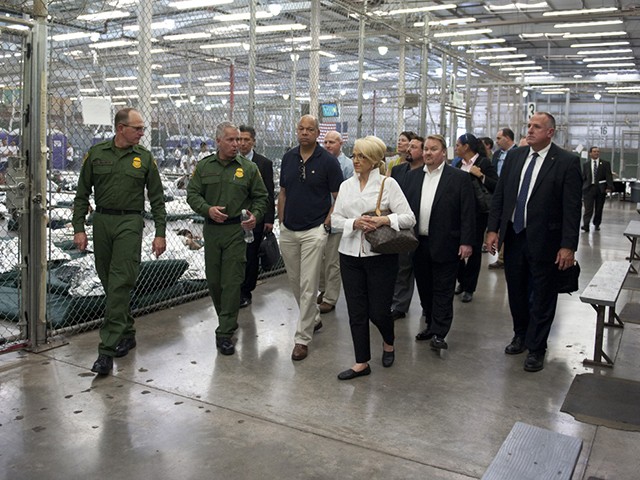 Erika Andiola, a prominent amnesty activist who is now with RAICES, last week demanded that presidential candidates denounce the Obama administration’s deportation policies, which she said created the “big, strong immigration enforcement machine that was taken by Trump and that was made even bigger.” Andiola told MSNBC’s Ari Melber that amnesty activists do not want more “Obama-type actions” on immigration.

After his debate performance in which he ripped former Rep. Robert Francis “Beto” O’Rourke for not backing the elimination of Section 1325, Castro doubled down on his immigration agenda at a town hall event over the weekend, even saying that criminalizing illegal immigration is “cruel, inhumane, un-American.”