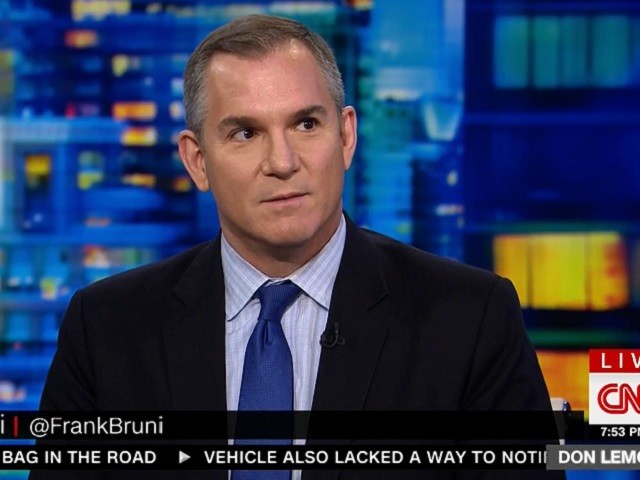 New York Times columnist Frank Bruni told CNN Sunday that his paper’s coverage of President Donald Trump has not been overly negative or “anti-Trump” but simply honest and objective.

In response to recent claims that the New York Times has been biased in its coverage of the president, Mr. Bruni insisted that his paper was not anti-Trump.

“Anti-Trump connotes driven by some sort of animus regardless of the facts. I don’t think we’ve been anti-Trump,” Bruni said. “I think we have been negative, and I think that’s the only honest way to cover this president.”

Asked by CNN’s Brian Stelter whether there was any truth behind the idea that news coverage of Trump has been “too negative,” Bruni said absolutely not.

“To call that out accurately is to end up with a body of coverage that is unusually negative but that is absolutely appropriate to the man and the situation at hand,” he concluded, agreeing with Stelter’s sum-up that the Times has been “negative but accurate.”

The conversation was sparked by recently reported statements by the former executive editor of the New York Times that the paper’s coverage is indeed anti-Trump.

Jill Abramson, who led the newspaper from 2011 to 2014, says the Times has become “unmistakably anti-Trump” in her soon-to-be published book, Merchants of Truth, a charge she also levels against the Washington Post.

Abramson wrote that the Times has a financial motive to bash the president due to its liberal readership but that the imbalance of its coverage is eroding its credibility. Moreover, the paper’s slant does not only respond to economic concerns but has a clear ideological underpinning.

“The more ‘woke’ staff thought that urgent times called for urgent measures; the dangers of Trump’s presidency obviated the old standards,” she writes.

Mr. Bruni himself has been no stranger to anti-Trump rhetoric, which has occasionally bordered on fabrication.

An example of Bruni’s “negative but accurate” coverage of President Trump includes his 2017 article “Why Does Donald Trump Keep Dissing Jews?” in which the former restaurant critic painted Trump as an anti-Semite.

On that occasion, it was the Israel National News and the Jewish Star that rushed to the president’s defense, exposing the actual anti-Trump animus that motivated the Bruni article and the inanity of its central thesis.

Mr. Bruni, a gay activist, has used his bully pulpit at the New York Times for more than just Trump-bashing, however.

In 2015, Bruni famously suggested that Christians should be forced to embrace the gay lifestyle, declaring that Christians who hold on to “ossified,” biblically-based beliefs regarding sexual morality have no place at America’s table and are deserving of no particular regard.

Bruni slammed all believing Christians as “bigots,” saying that their negative moral assessment of homosexual relations is “a choice” that “prioritizes scattered passages of ancient texts over all that has been learned since — as if time had stood still, as if the advances of science and knowledge meant nothing.”

“So our debate about religious freedom should include a conversation about freeing religions and religious people from prejudices that they needn’t cling to and can indeed jettison, much as they’ve jettisoned other aspects of their faith’s history, rightly bowing to the enlightenments of modernity,” Bruni wrote.

“Religion,” Bruni warned, “is going to be the final holdout and most stubborn refuge for homophobia. It will give license to discrimination.”

Church leaders must be made to take homosexuality off the sin list, Bruni wrote, citing fellow gay activist Mitchell Gold.

“His commandment is worthy — and warranted,” Bruni wrote.