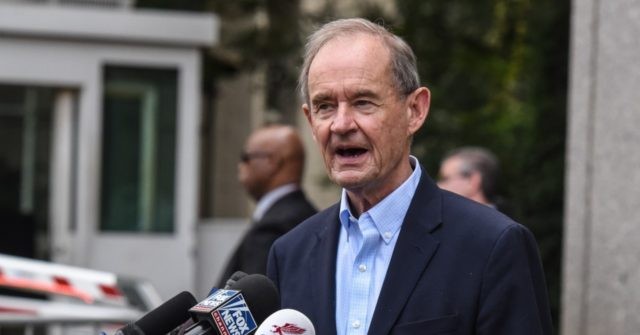 The Times‘ Jessica Silver-Greenberg, Emily Steel, Jacob Bernstein and David Enrich reported that Boies and a colleague, John Stanley Pottinger, worked with a man using the pseudonym Patrick Kessler who claimed to have videos of several prominent men having sex with Epstein’s victims, “even in the act of rape.”

According to the Times, the lawyers decided to target a “hot list” of men and demand settlements in which the men would pay large sums of money to a charitable foundation and the lawyers themselves would take 40 percent. Alternatively, the lawyers could make money by representing the men — “flipping from representing victims to representing their alleged abusers,” the Times notes.

Aside from the money involved, “Mr. Pottinger saw a chance to supercharge his law practice. For Mr. Boies, there was a shot at redemption, after years of criticism for his work on behalf of [disgraced blood testing company] Theranos and [alleged rapist and serial abuser] Harvey Weinstein,” the Times claims.

The lawyers were also enticed by the prospect of videos because of unproven yet widespread theories that Epstein had amassed his fortune by running a large-scale blackmail scheme.

But there was a problem: Kessler had “no damning videos” at all. “Kessler was a liar, and he wouldn’t expose any sexual abuse,” the Times concludes.

At one point, the lawyers considered approaching billionaire casino mogul Sheldon Adelson to sell him video evidence implicating Ehud Barak, who was challenging Benjamin Netanyahu in the recent Israeli elections. Adelson is a well-known supporter of Netanyahu. But they never approached Adelson, and the Israeli media showed no interest, the Times notes.

Boies and Pottinger invited the Times reporters to interview Kessler, allegedly hoping that media exposure of the existence of the videos would enhance their leverage over their targets.

But then Kessler met separately with the Times reporters and suggested that Boies and Pottinger were engaged in what he called a “blackmail” scheme of their own.

After reviewing the supposedly incriminating evidence Kessler had against the men on the target list, the Times concluded: “The photos he shared were too grainy to establish anyone’s identity. And many other elements of his story failed to hold up under scrutiny.”

Meanwhile, Kessler reached out to Dershowitz to talk about Boies. Dershowitz recorded the conversation, in which Kessler admitted that he had no video of Dershowitz after all.

When the Times showed Dershowitz — and his wife — a photograph of a bespectacled man that Kessler had once claimed showed Dershowitz having sex with one of Epstein’s victims, both of them laughed and said it was not him.

Meanwhile, Boies reportedly continued to vouch for Kessler through early November — until the Times confronted him in mid-November with evidence that he and Pottinger had been engaged in what looked like an attempt at extortion.

At that point, Boies reportedly called Kessler a “fraudster.” Separately, Pottinger told the Times that the plan to demand money from the targets of their investigation had been merely hypothetical.

The Times concluded, in a summary of its reporting Monday morning, “The story reveals the extraordinary measures that elite lawyers use to get evidence that could be used to win lucrative settlements — and keep misconduct hidden, allowing perpetrators to abuse again.”

Dershowitz, who once represented Epstein as a defense lawyer and has long maintained his own innocence, said earlier this year that he was being targeted with false accusations because he had argued in defense of President Donald Trump.

Joel B. Pollak is Senior Editor-at-Large at Breitbart News. He earned an A.B. in Social Studies and Environmental Science and Public Policy from Harvard College, and a J.D. from Harvard Law School. He is a winner of the 2018 Robert Novak Journalism Alumni Fellowship. He is also the co-author of How Trump Won: The Inside Story of a Revolution, which is available from Regnery. He worked for Dershowitz as a research assistant at Harvard. Follow him on Twitter at @joelpollak.