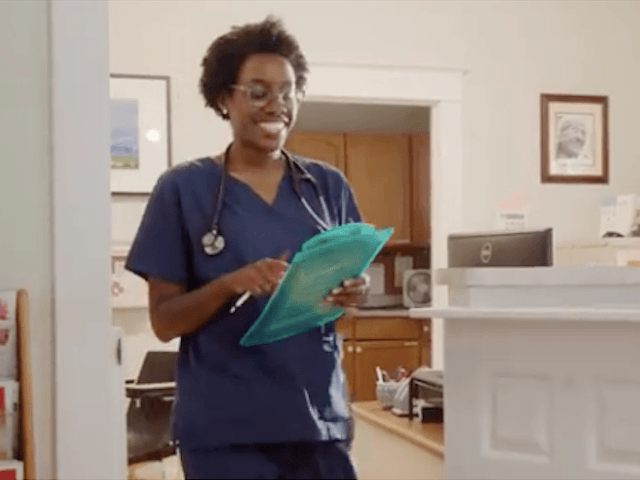 Democrat Lauren Underwood, 32, running for Congress in the far western suburbs of Chicago, has exaggerated her nursing career, pretending she worked as a nurse when she has never done so, a local newspaper reported Friday.

The Kane County Reporter dug into Underwood’s claims and found that while she had studied nursing and was a registered to practice nursing, “she never has, in Illinois, nor anywhere else.”

Instead, when she completed her education, Underwood worked for the Obama administration on Obamacare’s rollout — a project that was a disaster when it launched in 2013. (She now admits it was “not perfect.”)

She continued working for the Obama administration until the end of Obama’s term in 2017, then collected unemployment benefits before deciding to run for Congress, challenging incumbent Republican Randy Hultgren.

Underwood presented herself as a nurse in her campaign advertising — and the media largely swallowed the story.

A report by ABC News on Oct. 26 presented her as “a nurse who worked on the Affordable Care Act.” Time magazine reported on Friday: “Lauren Underwood’s Unlikely Congressional Bid Is All About Health Care.”

But the claim is just “part of the act,” according to the Kane County Reporter:

That Underwood never actually worked as a nurse— in college or after graduation— might come as a surprise to voters in the 14th Congressional District, now familiar with the torrent of television advertisements depicting her with a stethoscope serving patients.

She told Now This Politics, that, “as a nurse, I have looked into my patients’ eyes when giving discharge instructions knowing they cannot afford the prescription that we’re handing to them.”

According to her own biography, Underwood has never worked as a practicing nurse in a hospital, or in any setting where she would be discharging patients.

In her television advertisements, she has been regularly portrayed in “hands-on” nursing situations— ones her own biography also makes clear she has never experienced.

(Read the full article in the Kane County Reporter.)