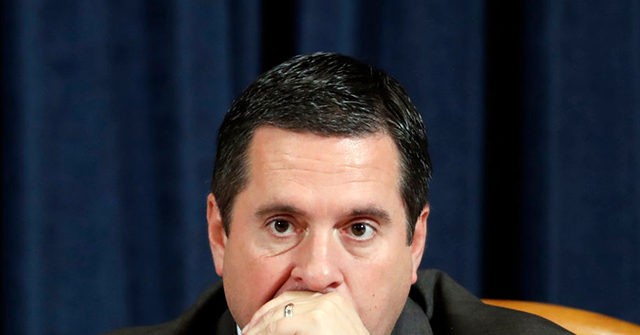 During an appearance on Fox News Channel’s “Sunday Morning Futures,” Rep. Devin Nunes (R-CA), the ranking Republican member on the House Intelligence Committee, sounded off about his frustrations regarding efforts to ascertain answers regarding the investigation into allegations of collusion between Russia and the Trump presidential campaign.

The investigation that goes back to 2016 has been a hot-button political topic over the last several years. Nunes said if evidence being withheld by the Department of Justice, the FBI and other intelligence agencies continues not to be forthcoming, the possibility of shutting those agencies down should be a consideration.

BARTIROMO: So, first, evaluate the Jim Comey testimony that we saw in front of the Senate Judiciary Committee this past week.

NUNES: Well, you know, on certain day, James Comey has an intelligence level higher than Einstein. He seems to know everything. He takes immaculate notes. He even takes those classified notes home and shares them with a lawyer. Somehow, those notes end up in The New York Times.

But then, other times, like you would think when you have actually opened an investigation into the Trump campaign and Russia, he seems to have amnesia. He’s forgotten everything.

And, look, I will just make this point. We asked him specifically and all the other dirty cops at DOJ and FBI and the intelligence agencies, in January of early 2017, where did this dirt come from? None of them seem to know the answer.

And you know what, Maria? Every damn person in that room knew the answer, except for the Republicans. That’s the truth.

Well, we want to talk more about this. I want to point out this op-ed that Kim Strassel from The Wall Street Journal wrote last week. And it’s called “The James Comey Election.”

And, in it, she writes: “Mr. Comey personifies what enrages Americans after they have gone through three-and-a-half years of this collusion narrative.” She says: “This was the crew that, in 2016, based on the thinnest of tips, launched a counterintelligence investigation into a presidential campaign, complete with secret surveillance warrants and informants.”

She goes on to say: “These — this all took place in Barack Obama and Joe Biden’s Washington. Those eight years also featured plenty of other swamp monsters. Don’t underestimate the number of Americans who fear a return to that world, Lois Lerner harassing conservative nonprofits, supervisors at the Bureau of Alcohol, Tobacco, Firearms and Explosives losing guns in Fast and Furious, the EPA minions who burn companies with ever-changing rules.”

And the list goes on. This is why she’s calling this the James Comey election.

Will the American people understand what took place under Joe Biden and Barack Obama’s watch and this plan to take down a candidate and then a sitting president, Congressman?

NUNES: Well, look, Maria, this is — this may sound a little self-serving, but the reason I wrote “Countdown to Socialism” is exactly for this reason, that people need to understand the consequences of this election.

We’re going to go back to what we have been living through, this nightmare. For me, it has been four years. You have to remember I was first briefed on this in September that the Russians were doing something nefarious, but was never given any information.

And now what we find out from the briefings we have recently had — and I know you asked Leader McCarthy this. This is a real problem, that these documents that clearly our government had, the legislative branch of government never received these.

Remember what I said earlier about that January meeting? Hey, who the hell paid for this? And, remember, it was the work that we did, the House Republicans did? We had to fight through subpoenas. We had to prove that it was the Clinton campaign and the DNC that had paid for the dirty dossier and this dirty information.

You know, remember all of that that happened? We should have been — they knew about this four years ago, when myself and Speaker at the time Paul Ryan were briefed, and they hid this from us. And they continued to hide it, all the way until we uncovered it.

But I will tell you, the documents that are underlying that we now have seen, I have only seen a few of those. They’re definitely smoking guns. That information definitely needs to be made available to the American public.

And, from what I understand, there’s even more underlying evidence that backs up what Director Ratcliffe put out. And just think how long it took for us to figure out this information. It’s — I know it’s mind-boggling. This has been a very difficult task for us to get to the bottom of, because you have corrupt officials.

And I think that’s the point here. Are you going to go back to and elect somebody like Biden, who just the other night, Maria, had the audacity to go after President Trump once again for what? That Putin — I think he said he had Putin wrapped around his finger.

And then he didn’t answer the question of, why did his son get $3.5 million from a Russian oligarch with ties to Putin?

If Ivanka Trump had been bought a Big Mac in the Red Square by a Russian oligarch, they would have locked her up and they would have said, this is evidence of collusion.

I think what they think is, is that — is that it’s OK for them to take all of this money and grift, but they will just take and accuse Republicans of doing it to cover up their tracks. And that’s basically what we knew about this the whole time.

BARTIROMO: Congressman, this is shameful.

NUNES: There was plenty of circumstantial evidence to know this, Maria, that this — that the Clinton campaign had created all of this because they knew the 33,000 e-mails were out there somewhere.

Then they went out and hired avatars to do it. So, they hired a former British spy named Steele, who did the Steele dossiers. Then they hired a suspected Russian spy, OK, so that they could give it a veneer of being a Russian. So, imagine that.

Now you have the Democrats hiring Russian spies, getting $3.5 million from Moscow, and nobody in the media seems to give a damn about it.

And so I think what Leader McCarthy said is exactly right. Every Republican senator and member of Congress should be saying, this is over. We want every damn bit of evidence that every intelligence agency has, or it’s maybe time to shut those agencies down, because, at the end of the day…

NUNES: … our liberties are more important than anything else we have in this country.

And they have been stampeded over by these dirty cops…

NUNES: … and the Democratic Party, and the media, who fails to report on it.