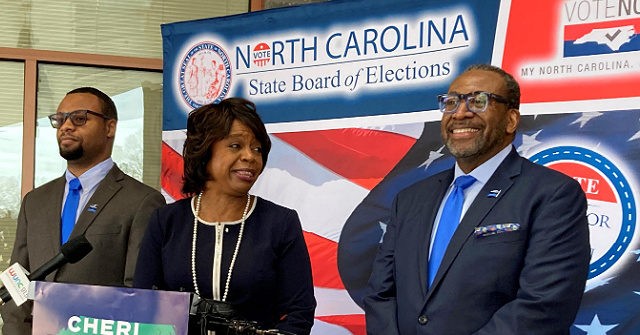 North Carolina Democrat U.S. Senate Candidate Cheri Beasley has a “dangerous record of letting violent criminals off the hook,” the National Republican Senatorial Committee (NRSC) said Friday as it launched a $1 million advertising campaign against her ahead of the May 17 primaries.

Beasley, who served as chief justice of the North Carolina Supreme Court from 2019 to 2020 and had been an associate justice since 2012, is the leading Democrat candidate in the North Carolina race and could potentially face off in November against Rep. Ted Budd (R-NC), the GOP candidate leading his competitors by double digits. With both Budd and Beasley so far ahead of other candidates within their own party, the NRSC is likely looking ahead to the general election, hoping to find a weak spot in Beasley’s more left-leaning judicial record.

The NRSC took aim at two of Beasley’s rulings in a video, titled “Victims,” the committee’s first advertisement of the 2022 cycle in North Carolina.

“They were victims of violent crimes, like murder and molestation — and Chief Justice Cheri Beasley failed to protect them,” the advertisement asserts. “The murderer who shot a boy in the face: Beasley vacated his death sentence. The man convicted of sexually assaulting a 7-year-old girl: she threw out the indictment, and that’s just the beginning. We can’t trust Cheri Beasley to protect our families.”

The first case the NRSC mentioned is the murder of 17-year-old Erik Tornblom in Fayetteville in 1991. The North Carolina Supreme Court in 2020, led by Beasley, vacated the death sentence of Marcus Reymond Robinson, who was convicted of shooting Tornblom with a sawed-off shotgun, stealing his wallet, and dividing the $27 between him and another man, the Citizen-Times reported.

Robinson was notably the first of four people to use the state’s “controversial Racial Justice Act to be removed from death row” in 2012, according to the report. The law was repealed in 2013 and Robinson’s death penalty was reimposed in 2016. The state justices ruled 4-3 in favor of Robinson and Beasley wrote the majority opinion, saying Robinson’s “constitutional right against double jeopardy was violated when his death sentence was reimposed in 2016,” according to the Times.

Now-Chief Justice Paul Newby, who was an associate justice at the time and the lone Republican serving on the court, penned a dissent, accusing the four majority justices of “violating the norms of the appellate review and disregarding or distorting precedent as necessary to reach their desired result.”

“Apparently, in their view, the law is whatever they say it is,” Newby wrote.

The second case the NRSC referred to in its advertisement was State v. White, in which the North Carolina Supreme Court threw out an indictment against a man convicted of molesting a seven-year-old girl.

“Beasley wrote the majority opinion, reversing a unanimous ruling from the N.C. Court of Appeals,” The Carolina Journal reported on June 16, 2020. “Beasley and the Supreme Court’s majority ruled that the indictment failed to meet legal requirements for identifying the alleged crime’s victim.”

Newby objected to that ruling as well and criticized the other justices for putting so much emphasis on a “legal technicality.”

“Once again, a child victim must endure the emotional distress and indignities of another trial because of a purely legal technicality,” he wrote in dissent. “It is this type of legal gamesmanship which leads to cynicism about whether justice prevails in our criminal justice system.”

Beasley lost to Newby in the race for the chief justice position in 2020, and the dynamic of the court shifted from six Democrats and one Republican, to four Democrats and three Republicans. She announced her 2022 Senate campaign on April 27, 2021, “seeking to break another barrier as the state’s first Black senator,” CNN reported.

Recent polls have shown Beasley trailing behind Budd in a hypothetical general election matchup. An Emerson College Polling/the Hill survey released this week showed Budd leading Beasley 48 percent to 41 percent with ten percent undecided, should they both secure nominations from their respective parties.