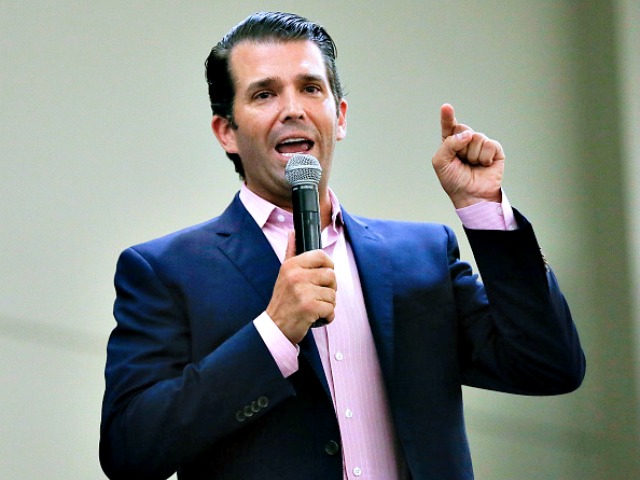 In a fake news article titled, “Cohen’s Account Of Russia Talks Raises Questions About Trump Jr. 2017 Testimony,” the far-left NPR misled its readers with the news that:

Trump Jr. told the Senate Judiciary Committee in September 2017 that although there had been negotiations surrounding a prospective Trump Tower in Moscow, they concluded without result ‘at the end’ of 2014.

‘Certainly not ’16,’ he said. ‘There was never a definitive end to it. It just died of deal fatigue.’

Trump’s account contrasts with the new version of events given by Cohen on Thursday in a guilty plea in federal court. In that new version, Cohen says the discussions with at least one Russian government official and others in Moscow continued through June 2016, well into Trump’s presidential campaign.

This would be a significant development because it would mean that Trump Jr. had potentially perjured himself to Congress, which is a felony.

The only problem with NPR’s reporting is that none of it is true.

The Federalist, which first caught NPR’s lie, points out that:

In fact, Senate investigators were asking Trump Jr. about a series of efforts to develop property in Russia, going back several years. Reporter Phil Ewing (reporter Tim Mak contributed to the story) conflates one of those efforts with another separate effort. That conflation results in the false news report.

The “certainly not ’16” remark from Trump Jr. pertains to a Trump Tower deal in Moscow involving another party.

Q: It’s been reported that in late 2015 or 2016 when now President Trump was running for office the Trump Organization was pursuing a plan to develop a massive Trump Tower in Moscow. Is that accurate?

Trump Jr. also offered to provide investigators with the letter of intent signed by his father.

Only after the false story remained published for most of Friday, did NPR finally issue a weasally correction:

An earlier version of this report mischaracterized an answer Donald Trump Jr. gave to Senate investigators in 2017 about the prospective projects his family was negotiating with people in Moscow.

Trump Jr. did not address what Cohen has now admitted — that talks about such a deal continued at least into June 2016, longer than previously known and well into the presidential campaign.

After NPR issued its grudging correction, Trump Jr. blasted NPR by comparing them to the left-wing CNN, which “has the market cornered” on fake news.

I guess this is as close as I’ll get to an apology where yet another “bombshell” bites the dust.

Pro tip: don’t just rush to publish anything thinking that it’s the got ya you so desperately want it to be. CNN has the market cornered on that… let them own it 👍 https://t.co/mtmXp6O8GW