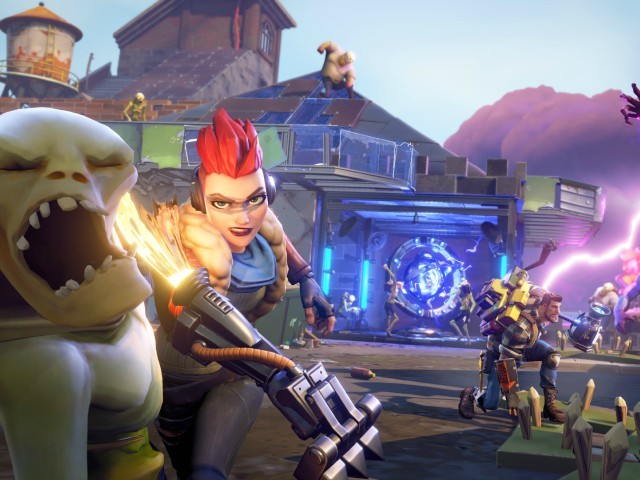 Imagine the horror: you’re a 12-year old kid preparing to buddy up with a fellow player on Fortnite in an attempt to defeat 98 other players and win the battle royale when you discover that she’s not what she seems…

You thought the cowgirl with an absurd pickaxe and a submachine gun was a kid of about your own age. But in fact, it’s some creepy old guy who just wants to lecture you on climate change instead of destroying opponents, building bases, and showing off their dance moves.

This is not a fictional scenario. This actually happened and the creepy old guy is actually boasting about it. (h/t Eric Worrall)

After hearing an 11 year-old’s Fortnite video got more views than a climate change lecture, Henri Drake had an idea.

A red haired cowgirl grabs a submachine gun from a building and as she runs away from the oncoming storm, the player in control starts talking about the impact CFC emissions have on global warming.

“We basically have since banned those materials… but we found out last year that the concentration of these gases in the atmosphere is increasing again.”

The cowgirl is Henri Drake, a casual gamer and climate scientist from the Massachusetts Institute of Technology (MIT), and the game is Fortnite, a crazy popular multiplayer shooter game.

It’s a strange mix, but by creating the ClimateFortnite Twitch channel Henri is hoping to use the games popularity to explain global warming and climate policy to a wider audience.

He’s not going it alone, there’s other scientists either playing with him or just hanging around to answer the questions thrown out by viewers. Scientists like Chris, a masters student at Boston University, who is on hand to field a question about the Paris climate agreement thrown out at the start of one game.

It’s a strange mix, but the ClimateFortnite Twitch channel Henri created is using the game’s popularity to teach people about global warming and climate policy.

He streams video of him playing the game with other climate scientists and they all take turns answering questions from the audience.

When a question about the Paris climate agreement comes up you hear Chris’s voice over the mic, a masters student from Boston University. He starts explaining who could fill the void if the US pulls out of the Paris agreement as the team skydives out of the Battle Bus, the way every Fortnite game starts.

Chris names several countries while landing in Pleasant Park, “China is obviously a large emitter,” before Henri interrupts to direct the team: “Let’s go north-east side.”

Chris continues as the team meets up, “Because [China is] such a large impact on the global economy and global emissions they’re someone to watch.”

“Give me a child until he is seven and I will give you the man”, said the Jesuits.

But even Ignatius Loyola at his most fanatical would have stopped short of propagandising kids during a game of Fortnite.