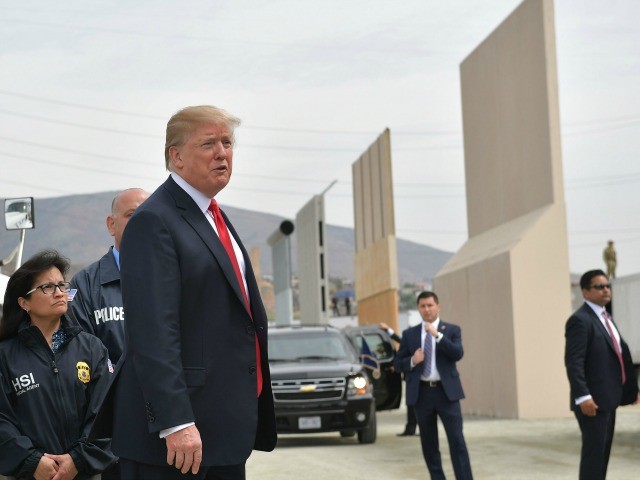 President Trump may give away his political leverage on immigration this week as GOP leaders try to jam him on border wall funding and cheap-labor visa-worker programs.

This week, Trump will decide to either veto or sign the no-wall, multi-agency budget package for 2019, which GOP leaders have slapped together.

GOP leaders are urging Trump to sign the 2019 package by promising him they will pass a Department of Homeland Security (DHS) spending bill — with a border wall — after the election.

Several senior GOP leaders have openly said they will not fight the Senate Democrats’ bitter opposition to the wall, even after the election. The Senate’s draft DHS budget only includes $1.6 billion for border barrier work.

Likewise, the president’s White House Legislative Affairs Office has made no effort to halt the DHS spending bill, nor has there been a push for full border wall funding ahead of the budget showdown.

The 2019 funding package, which the House is slated to pass this week, would provide $607 billion for the Pentagon and $178 billion for the Departments of Health and Human Services, Education, and Labor. But it does not include the 2019 budget for DHS or a single red cent for the border wall.

The DHS bill created by House GOP leaders includes $5 billion for the wall, but that pot of money is tied to a series of cheap-labor programs that are intended to block 2019 wage raises for Americans. Rep. Kevin Yoder (R-KS) put the cheap-labor agenda into the DHS funding bill. This combination means the House GOP leadership bill will provide some wall money if the president betrays his Inauguration Day promise to “Hire American.”

Also, by finishing the other agencies’ budgets before the election, GOP leaders hope to deny Trump any budget leverage that he can use to force a border wall deal with Democrats and Republicans.

Trump’s veto pen is the last measure of accountability for congressional Republicans before voters wield the ultimate measure in November. … Congress has played hide-the-ball on Trump’s border wall for the better part of two years, and that’s not going to change.

True. GOP leadership is basically planning to jam Trump on purpose (by linking DHS CR w/Defense $$). They thinks it will make it LESS likely that he shut down anything before the midterms -> https://t.co/1AXqOirDlR

“Administration officials acknowledge privately that there is no plan for how additional [border-wall] funding will be achieved after” the midterms. https://t.co/A7MU3MMuE7

Even Politico offered him a budget strategy for getting wall money:

.@JakeSherman and @AnnCoulter agree … Trump’s crazy to sign the spending deal as it stands. https://t.co/XdIOxa87Ba

Trump seems to recognize that he is not on course to get the concrete-and-rebar wall he was elected to get:

Trump is flying blind in the budget dispute because his Hill outreach team is in shambles.

The White House Office of Legislative Affairs was previously headed by Marc Short, the former Koch brothers ally who abandoned Trump to join CNN as a contributor. Short was selected for Trump’s populist immigration agenda this past summer. That plan never came to fruition, and the Trump’s immigration agenda is set to end the year with no legislative successes.

Under Short’s guidance, the Office of Legislative Affairs had only one accomplishment: the tax cuts that GOP lawmakers now admit have failed to galvanize Trump’s base of support for the midterm elections.

Since Short left the job, Shahira Knight has been running the show at Legislative Affairs. Knight, much like Short’s connection to the billionaire Koch brothers, has close ties to the president’s enemies — mainly, former White House economic adviser and Goldman Sachs executive Gary Cohn.

Cohn was widely considered one of the key figures standing in the way of Trump’s “America First” agenda throughout the first year of the administration. Knight, as Politico has noted, was a “trusted lieutenant” to Cohn during his stint at the White House.

“If anyone called me and said they needed to start a Washington office tomorrow and they were really serious, I’d say go talk to Shahira Knight,” Cohn told Politico of Knight when she was appointed to the Legislative Affairs director position. “She’s a rock star.”

Since Knight took charge of Legislative Affairs, there has been no initiative on Capitol Hill to stop the cheap-labor program that Rep. Yoder slipped into the DHS funding bill. As Breitbart News exclusively reported, Attorney General Jeff Sessions was the sole Trump official to stop Yoder’s slew of open borders measures.

What’s in the DHS Spending Bill?

The DHS funding bill ties only $5 billion for Trump’s border wall to a variety of cheap-labor giveaways to the big business lobby, the outsourcing industry, and the open borders lobby.

The DHS spending bill does not include any additional funding for the Border Patrol to effectively detain illegal aliens without releasing them into the American general public.

The GOP legislators who supported Yoder’s DHS spending bill include:

In March, Trump signed a 2018 omnibus spending bill that barred him from using new concrete prototypes to build the wall. The spending bill provided just $1.6 billion, but only for the same fencing President Barack Obama’s administration used.

At the time, Trump vowed not to sign another spending bill that did not include money for his estimated $23 billion border wall.

This time around, the government-wide spending bill needed to be signed before the midterm elections has been split into two big appropriations bills, leaving the DHS bill until after the election. This means Trump loses the ability to vote for the DHS budget before the election.

If Trump signs the Pentagon/Education/HHS/Labor bill before the election, he loses any political leverage over that pot of spending that he might use to get a wall in the post-election DHS budget.

Meanwhile, the DHS spending bill — with Yoder’s cheap-labor programs favored by the U.S. Chamber of Commerce and big business donors — will be passed in November.

Trump could veto that bill once the Democrats block wall funding — but Trump’s veto of the DHS bill has minimal impact.

The border security portion of the DHS budget is not impacted by a budget shutdown because it is a national-security mission. Also, DHS’s United States Citizenship and Immigration Services division will continue to approve work visas and green cards because it is funded by immigrants’ fees. Any veto standoff will likely end with a 2019 deal to continue the 2018 budget for another year — still ensuring he does not get money for his concrete wall.

No Fight in GOP Congress

Though GOP midterm voters have told pollsters for the last six months that immigration is their biggest issue going into the election and should be Congress’s number one priority, the GOP House and Senate leadership have focused their attention on tax reform.

And while Trump has attempted to refocus the midterm elections on his populist, economic nationalist immigration agenda, the GOP Congress has signaled that, once again, they will not put up a fight for the border wall.

In interviews with the Washington Post, a number of GOP lawmakers, including Sen. John Cornyn (R-TX), Sen. Richard C. Shelby (R-AL), Sen. Jeff Flake (R-AZ), Rep. Mark Meadows (R-NC), and Rep. Tom Cole (R-OK), signaled that they would not try to fight for Trump’s immigration agenda before the midterms.

Cornyn even claimed that a border wall would not stop illegal immigration, an argument that Democrats and the Republican establishment often make to avoid dealing with the country’s immigration crisis.

“People can climb over the wall or go under the wall or through the wall. We’ve seen that in different places,” Cornyn told the Post. “If it’s just unattended without sensors, without technology, without people, then it won’t work.”

Cole claimed the GOP Congress could not focus on Trump’s border wall because they must secure DHS funding.

“We haven’t given up the fight. But if it keeps us from doing other things that are pretty important, like defending the country, then I think it’s a fight not worth having right now,” Cole said. “Let’s get these critical day-to-day functions of the government done, and the American people will be expressing an opinion in the election. We’ll see where we’re at when we come back.”