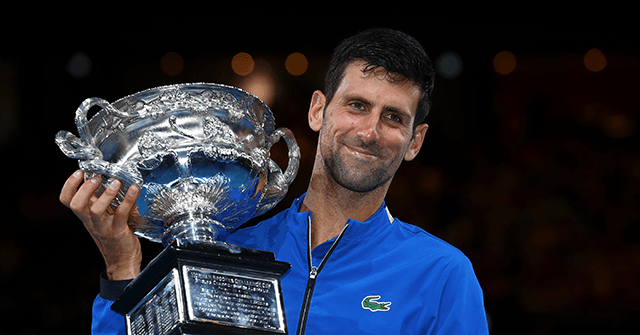 Top-ranked tennis champion Novak Djokovic broke his silence after his detention and deportation from Australia in an interview published by the BBC on Tuesday, defining himself as not against vaccinations generally but unconvinced that currently available Chinese coronavirus vaccine products are right for him.

Djokovic remains at the top of the Association of Tennis Professionals rankings at press time, despite not being allowed to play in the only Grand Slam championship that has occurred this year – the Australian Open, where organizers advertised his presence to sell tickets, on the grounds that the government had given him a visa and an exemption to Australia’s repressive coronavirus vaccine mandate. Police abruptly arrested him upon his arrival in Melbourne and forced him into a migrant detention facility, after which his request to enter the country was reapproved. But the country’s immigration minister, Alex Hawke, subsequently ordered his deportation on the grounds that his mere presence could stoke anti-vaccine sentiment in the country.

Djokovic told BBC journalist Amol Rajan that he is not against vaccines generally and expressed offense at the logic used in his ouster from Australia.

“What people probably don’t know is that I was not deported from Australia on the basis that I was not vaccinated, or I broke any rules or that I made an error in my visa declaration,” Djokovic explained. “The reason why I was deported from Australia was because the Minister for Immigration used his discretion to cancel my visa based on his perception that I might create some anti-vax sentiment in the country or in the city, which I completely disagree with.”

Djokovic insisted that he was not part of any anti-vaccination movement.

“I say that everyone has the right to choose, to act or say whatever they feel is appropriate for them, and I have never said that I’m part of that movement [anti-vaccines],” Djokovic said, asked to respond to people who oppose vaccines and saw him as part of their community. The player lamented that part of the reason an image surfaced of him as an opponent of vaccination in general is that no one bothered to check with him on his own opinions.

“You know, no one in the whole process – during the Australian saga – has asked me on my stance or my opinion on vaccination. No one,” Djokovic said. “So I could not really express, you know, what I feel and where my stance is, neither in the legal process, neither outside, so it’s really unfortunate that there has been this kind of misconception and wrong conclusion that has been made around the world based upon something that I complete disagree with.”

Djokovic nonetheless confirmed that he has not received doses of any Chinese coronavirus vaccination product – he has tested positive for the disease twice – and that he does not feel comfortable ingesting those products “as of today.”

“I understand that, and support fully, the freedom to choose, you know, whether you want to get vaccinated or not. And I have not spoken about this before and I have not disclosed my medical record and my vaccination status because I had the right to keep that private and discreet,” Djokovic explained. “But as I see there is a lot of wrong conclusions and assumptions out there I think it’s important to speak up … I was never against vaccination.”

Many who accuse Djokovic of opposing vaccination generally as a medical strategy point to a Facebook live discussion from April 2020 in which the player mused about the possibility that countries would force their citizens to take coronavirus vaccine products. English-language reports translated Djokovic as saying, “personally, I am opposed to vaccination” – a statement that Serbian language speakers have argued he never said.

Djokovic affirmed that he was “willing to pay” the price of missing out on being history’s winningest tennis player in the name of standing up for “the freedom to choose what you put into your body.”

“I understand the consequences of my decision and one of the consequences of my decision was not going to Australia and I was prepared not to go,” Djokovic said, confirming his team’s repeated insistences that Djokovic did not attempt to “invade” Australia and only flew into Melbourne because the government granted him a visa (officials have not denied that they granted Djokovic a legal visa, but blamed a computer for the alleged mistake).

“And I understand that not being vaccinated today, I’m unable to travel to most of the tournaments at the moment. That is the price I’m willing to pay,” Djokovic concluded. “The principles of decision-making on my body are more important than any title or anything else.”

Prior to the Australia Open, Djokovic was tied with rivals Roger Federer and Rafael Nadal for the most Grand Slam victories ever, all three of them having won 20 each. Federer did not play the Australian Open due to injury. Nadal won it, making him, statistically, the greatest men’s tennis player of all time.

Nadal began his career as a clay-court dominant player and has remained so throughout his career, though he has evolved to become a threat on hard surfaces like the Australia Open’s. He has won the Australian Open on only one other occasion – in 2009, when Djokovic retired during a match with Andy Roddick and left the field open for what became one of many classic championship matches between Nadal and Federer. Nadal has not managed to be a contender for the title at the tournament, Djokovic’s admitted favorite, while the Serbian tennis player has been at the height of his play.

In contrast to his two Australian Opens, Nadal has won the clay-court French Open 11 times.

“In a way, I feel sorry for him. But at the same time, he knew perfectly the conditions for many months. He made his own decision,” Nadal told reporters. “The world has suffered enough to not follow the rules.”

Nadal added that he believed “what people who know about medicine say” and urged the public not to question it.