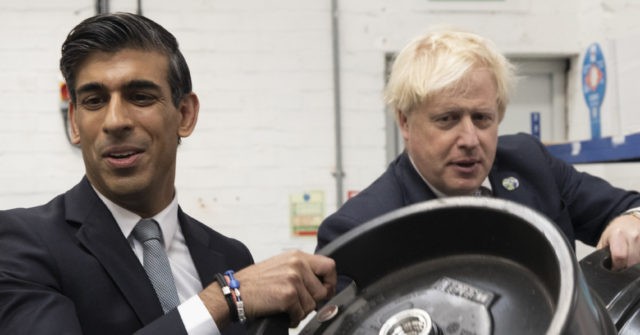 Despite calling himself a ‘tax-cutting’ Conservative, Prime Minister Boris Johnson has announced that he will plow ahead with massive tax hikes as living costs soar across the UK.

Boris Johnson and Chancellor of the Exchequer Rishi Sunak have announced that the nominally Conservative government will stick with the planned payroll tax increases. The hike — which will initially take the form of an increase in the National Insurance payroll tax — comes despite the prime minister and his chancellor describing themselves as “Thatcherites” and “tax-cutting Conservatives”.

According to a report by the BBC, employees, employers, and the self-employed are all to pay 1.25p more tax per pound earned under the new plans starting from April, with the tax bump set to last one year.

After that, the public broadcaster notes that the extra tax will instead be collected by the Health and Social Care Levy, a new payroll tax for those in the UK.

In an opinion piece published in The Sunday Times, both Boris Johnson and Rishi Sunak justified the tax increase in light of the stark costs of the Chinese Coronavirus pandemic and the government lockdowns.

“The cost has been enormous — well over £400 billion,” the piece reads. “We have been able to afford it because the Conservative government is careful with the nation’s finances. We must continue to be responsible now, as we deal with Covid aftershocks — and above all with the Covid backlogs in healthcare.”

“We must go ahead with the health and care levy,” the co-penned piece continues. “It is progressive: the burden falls most on those who can most afford it. Every penny of that £39 billion will go on crucial objectives — including nine million more checks, scans and operations, and 50,000 more nurses, as well as boosting social care.”

Despite hiking taxes for British workers and employers, Johnson and Sunak insisted that they were both “tax-cutting Conservatives” and even “Thatcherites”.

“We are tax-cutting Conservatives. We believe people are the best judges of how to spend their money,” wrote the pair. “We want to get through this phase and get on with our agenda, taking advantage of our post-Brexit freedoms to turn the UK into the enterprise centre of the world.”

“We are Thatcherites, in the sense that we believe in sound money. There is no magic money tree,” they continued.

However, despite this supposed commitment to keeping money in the hands of the public, the Johnson government has decided to hike taxes at a time of increasing difficulty for households.

The cost of energy across Europe is surging, with a report from the Evening Standard claiming that Britons could see a 48 per cent rise in energy costs this spring, with total costs increasing to nearly two thousand pounds.

A spokesman for the government acknowledged the difficulty people in the UK were facing.

“We know this has been a challenging time for many people, which is why we’re providing support worth around £12 billion this financial year and next to help households across the country with the cost of living,” the spokesman said, according to the paper.

As taxes look set to rise in the UK, the Johnson government is also getting set to boost the level of government handouts in an apparent bid to boost popularity.

The Conservative government has been accused of trying to manipulate announcements surrounding extra funding to poorer parts of the UK, according to The Guardian, with a supposedly new injection of £1.5 billion pounds announced by Secretary of State for Housing, Communities and Local Government Michael Gove, being made up of already committed funding announced in Autumn last year.

The move — which has earned the ire of opposition Labour and SNP politicians — comes as the government has been rolling out a number of “Operation Red Meat” policies in an apparent bid to save Boris Johnson’s embattled premiership.

An eventual end to the BBC tax, the scrapping of mask mandates, and deploying the Royal Navy in the English Channel to curb the ongoing migrant crisis have all been used by Johnson in a push to recover popularity after the so-called “partygate” scandal.

Even the payroll tax hike announced by Johnson comes with a proviso that it will only last one year, being later offloaded to a different tax in 2023.

However, a similar so-called “temporary” measure in Ireland which was implemented in neighbouring Ireland in 2010 has yet to be scrapped after over ten years of use.

The Universal Social Charge, or USC, was implemented by the struggling Fianna Fáil government after Ireland’s housing crash as a way of generating much-needed income. Despite its supposed temporary nature, the payroll tax has yet to be scrapped in the country.