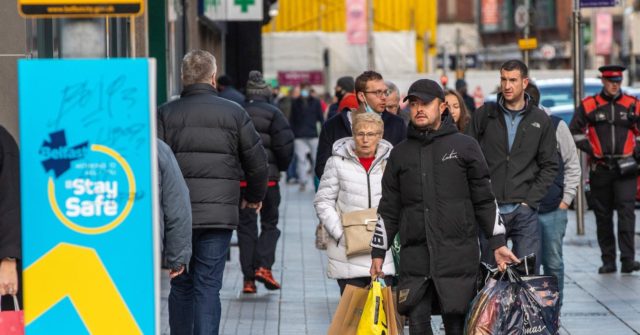 Northern Ireland has lifted almost all of its remaining COVID Lockdown rules, with authorities in the south of the island also considering easing a raft of measures.

Northern Ireland scrapped almost all of its restrictions as of Tuesday afternoon, sweeping away rules including mandatory mask-wearing introduced in reaction to the Chinese Coronavirus.

The relaxation comes as authorities in the south also eye-up a further relaxation of lockdown rules, including putting an end to the mandatory wearing of masks in schools.

According to a report from the Belfast Telegraph, the vast majority of legal COVID restrictions in place in Northern Ireland were scrapped, including various regulations mandating the wearing of masks in shops and on public transport.

Also scrapped are rules mandating the use of COVID certs for nightclubs and indoor unseated gatherings of more than 500 people, as well as an end to track and trace regulations targeting businesses in the region.

Meanwhile, measures relating to testing and self-isolation will remain in place, while the region’s Department of Education has so far not made clear whether rules surrounding social distancing and the mandatory wearing of masks in schools will be maintained.

Instead of relying on restrictions being mandated in law, authorities are now aiming to use non-binding guidelines to encourage individuals to voluntarily help curb the spread of COVID-19.

“With the reduced threat from the Omicron variant, we can move away from an emergency and legalistic framework to a new approach where making safer choices is embedded in our daily lives,” said Northern Ireland’s Health Minister, Robin Swann.

“So please do not jump the gun and start behaving as if the pandemic is over,” the pro-UK Unionist asked the public. “That is not the case.”

However, while Swann also warned that a new variant may emerge necessitating the reintroduction of restrictions, he admitted that with the collapse of Northern Ireland’s devolved government, reimplementing lockdown laws would be extremely difficult.

“As ministerial colleagues will be aware I intend to ensure that the Department of Health retains temporary powers under public health legislation to act in response to urgent need,” Sky News reports the health minister as saying. “But I am aware that even with these powers in place, it is hard to foresee the circumstances under which they could be exercised, if the executive is not restored.”

Ireland Rips Up Vaccine Passport After Half-a-Year of Restrictions on the Unvaxxedhttps://t.co/97OKqguVPt

As Northern Ireland abolishes the legal standing of almost all of the region’s COVID lockdown rules, authorities in the Irish republic are also considering a further loosening of measures.

According to an Irish Times report, forced mask-wearing in Irish schools could be done away with as early as next week, with a raft of other measures also to be reviewed by the end of February.

Older children within the Irish school system have been mandated to wear masks since September 2020, the publication reports, with younger children in primary schools being under similar rules since last December.

While Ireland previously had in place on-and-off one of the harshest lockdowns in Europe, the country dramatically loosened its COVID restrictions shortly after Boris Johnson announced a similar lifting of measures in England.

The previous loosening in January saw an end to the country’s regime of vaccine passes, which prohibited unjabbed individuals who hadn’t recovered from COVID from accessing indoor service in bars and restaurants, as well as from visiting nursing homes.