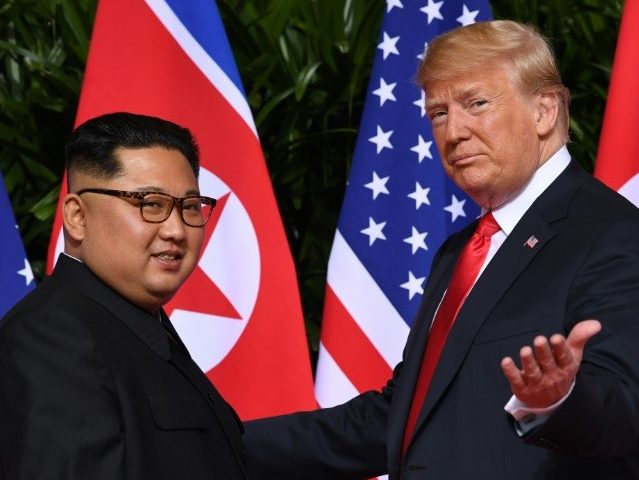 North Korean media remain almost completely silent about the second summit between dictator Kim Jong-un and U.S. President Donald Trump, even though the meeting is less than three weeks away.

South Korea’s Yonhap News on Thursday reported radio silence from the state-run North Korean press even after Trump mentioned the summit in his State of the Union address and U.S. envoy Stephen Biegun arrived in Pyongyang to work out the details. Biegun met with South Korean officials before moving along to the North on Wednesday to lay the groundwork for a summit in Vietnam on February 27 and 28.

Yonhap noted a delay in reporting from North Korean media is not unusual – news of U.S. Secretary of State Mike Pompeo meeting with Kim Jong-un in October was not reported until a day after it occurred, and North Korean envoy Kim Yong-chol’s latest visit to Washington was not discussed until he returned to Pyongyang and delivered a briefing to Kim Jong-un.

The clearest sign of shifting attitudes Yonhap could find in Pyongyang was the lack of a major military parade to commemorate the founding of North Korea’s military on February 8. Last year’s parade was a huge event that showed off ICBMs theoretically capable of striking the continental United States.

This year’s more subdued commemoration might be meant as a conciliatory gesture, although Yonhap mentioned it might also be a consequence of North Korea wishing to preserve the memory of last year’s 70th-anniversary celebration as an unrivaled event.

South Korea’s government appears confident the second Trump-Kim summit will proceed on schedule and will produce more concrete results than the first meeting.

Korea Joongang Daily (KJD) reported on Thursday that South Korea’s presidential Blue House hopes to begin arranging the fourth meeting between President Moon Jae-in and Kim Jong-un sometime after the presumably successful Trump-Kim summit. This would also place the Moon-Kim meeting on the calendar after the conclusion of Lunar New Year celebrations, a holiday observed in both North and South Korea.

“What is unique about the next Moon-Kim summit is that it will likely be held in Seoul, which would make Kim the first North Korean leader to visit the South’s capital since the end of the 1950-53 Korean War,” KJD reported, quoting a letter Kim sent to Moon last year in which he said he was willing to visit Seoul.

The Vietnamese seem fairly excited about hosting the summit. The Vietnamese Foreign Ministry said on Wednesday that it “strongly supports” the U.S.-North Korea dialogue and is ready to cooperate with both sides to make the meeting happen.