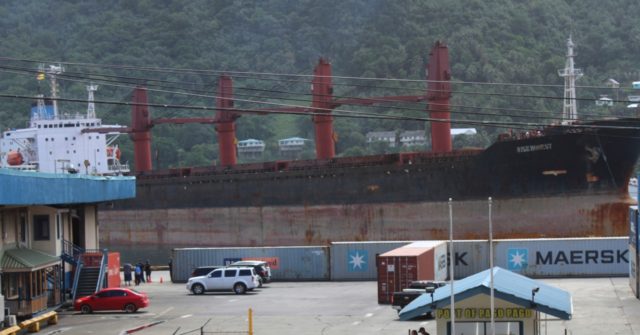 North Korea’s Ambassador to the United Nations Kim Song held a press conference at U.N. headquarters on Tuesday in which he demanded the return of the Wise Honest, a cargo vessel seized by the United States for shipping coal in violation of U.S. and U.N. sanctions.

“The United States should deliberate and think over the consequences its outrageous act might have on the future developments. Also, the United States must return our cargo ship without delay. We regard it as part of our territory where our sovereignty is fully exercised,” Kim demanded.

The ambassador charged that seizing the cargo ship violated the spirit of the joint statement issued by President Donald Trump and North Korean dictator Kim Jong-un after their first summit in Singapore last year. He denounced the seizure as a “product of the extreme hostile policy of the United States against the North.”

“Unilateral sanctions and extraterritorial application of national jurisdiction of a third country cannot be justified in any case, and in any circumstances and under the international law,” Kim asserted.

“The horrible unilateral sanctions and domestic law which the United States has employed in dispossessing our cargo ship is clearly illegal,” he said.

Kim refused to answer when a reporter asked if the Wise Honest was carrying banned cargo when it was seized. Despite his bluster about “unilateral” sanctions, a United Nations Panel of Experts determined the North Korean ship was indeed breaching U.N. sanctions with its coal shipment.

Kim said in the letter that America’s “unlawful and sovereignty-infringing” seizure of the Wise Honest proves the U.S. “is indeed a gangster country.” He described the seizure as “illegal robbery.”

The Wise Honest was actually seized by Indonesia, not the United States, when it was caught conducting an illegal ship-to-ship transfer off the Indonesian coast. The captain of the ship was charged with violating Indonesian law, although the charges were dropped in February. The United States began the lengthy process of taking custody of the ship almost a year ago. The ship’s illegal cargo bounced around the Pacific for a while before settling in Malaysia, where it was impounded at last report.

The U.S. State Department responded to Ambassador Kim’s press conference on Tuesday by stressing that all U.N. member countries are obliged to uphold the sanctions Wise Honest was seized for violating.

“As President Trump has said, he believes Chairman Kim will fulfill his commitment to denuclearize, and the United States remains open to diplomatic negotiations with North Korea to make further progress on that goal,” a State Department spokesman added in remarks to South Korea’s Yonhap news agency.

Yonhap noted the South Korean government had no comment on the seizure of the Wise Honest, which was allegedly in the process of delivering its cargo to a South Korean company that claimed it believed the coal to be of Russian origin.

“The government has been faithfully implementing U.N. Security Council sanctions on the North,” a spokesman for the South Korean Unification Ministry stressed.