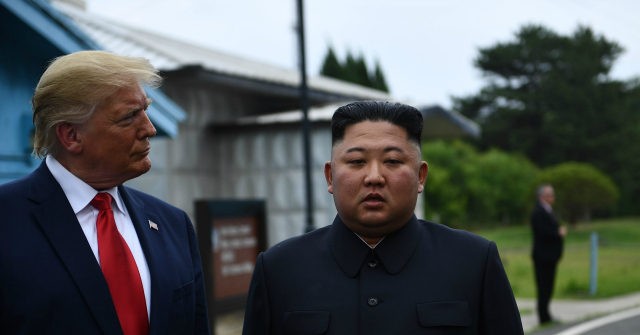 North Korea turned sour on America again in a tirade at the United Nations on Wednesday; it condemned Washington for being “hell-bent on the hostile acts” against the nation after the United States cosigned a letter in support of sanctions against the regime.

The outraged statement from North Korea’s mission to the United Nations in New York came just days after President Donald Trump met with communist dictator Kim Jong-un in Panmunjom, a village in the Korean Demilitarized Zone (DMZ), and became the first American head of state to step foot in North Korea.

At that meeting, Trump and Kim agreed to rekindle dialogue on denuclearization of the Korean Peninsula, which Washington defines as an end to North Korea’s illegal nuclear weapons program but North Korea considers the removal of U.S. troops from Korean soil. Talks ended abruptly in February after Trump walked out of an in-person meeting with Kim in Hanoi, Vietnam, complaining that the North Koreans were making unreasonable demands without yielding on their nuclear weapons.

The Trump administration has insisted it will not ease sanctions on Pyongyang over its nuclear program until Kim can prove the nation has completely, irreversibly, ended it. The U.N. letter that offended the North Koreans – reportedly also signed by France, Germany, and the United Kingdom – reiterated that commitment and urged other nations to adhere to the sanctions.

The letter “speaks to the reality that the United States is practically more and more hell-bent on the hostile acts against the DPRK, though talking about the DPRK-U.S. dialogue,” the North Korean mission protested, according to the South Korean Yonhap News Agency.

“What can’t be overlooked is the fact that this joint letter game was carried out by the permanent mission of the United States to the U.N. under the instruction of the State Department, on the very same day when President Trump proposed (for) the summit meeting,” their statement continued, urging the international community to “keep vigilance against deliberate attempts by the United States to undermine the peaceful atmosphere that has been created on the Korean peninsula in no easy way.”

The U.N. Security Council sanctions on North Korea are the strictest in the history of the organization, targeting almost every major industry in the country. Notably, while the United States led the sanctions push, none of the Council’s members vetoed the sanctions when introduced in 2017. China and Russia are permanent members of the Security Council and could have stopped the sanctions, but chose not to. At the time, Kim claimed to be testing intercontinental ballistic missiles on a regular basis, flying them over Japan, and would soon go on to detonate what is believed to be the last nuclear bomb tested in the country in September 2017.

Since the sanctions took hold, Kim has changed his strategy, meeting with Trump on three occasions and holding summits with South Korean President Moon Jae-in and Chinese Communist Party chief Xi Jinping. The meetings with South Korea are particularly notable given that Pyongyang does not recognize South Korea’s sovereignty, considering it a rogue state of the Democratic People’s Republic of Korea.

The North Korean U.N. mission’s condemnation of the United States came less than a week after Trump and Kim’s friendly Panmunjom encounter, where Secretary of State Mike Pompeo told reporters that Washington was not at a place to ease sanctions yet. While sanctions would remain in place, Pompeo said, “We think we do have a jumping-off point for these discussions, which have put us in a place where we can truly evaluate if there is a clear path forward.”

“I left there with the recognition, I think, that Chairman Kim really wants to get something done, something very significant, that we want to do so in a timely way,” Pompeo told reporters.

Pompeo’s uncontested presence at the meeting between Trump and Kim was in itself a small concession to the Americans, as months prior, the communist regime had insisted it would not engage in negotiations with the Americans until Trump fired his top diplomat and replaced him with someone “more mature.” There is no indication that Kim objected to Pompeo’s presence this weekend, and the secretary of state still appears heavily involved in negotiations.

Rumors began circulating in South Korean media Thursday that one of the things the two sides may get done is opening liaison offices in their respective countries. Currently, North Korea and the United States are technically at war – the Korean War has been raging since 1950, though an armistice agreement took hold in 1953 – and have no diplomatic ties.

An anonymous “diplomatic source” told South Korea’s Chosun Ilbo that Trump suggested to Kim during their meeting Sunday that America could open a liaison office in Pyongyang.

“Trump expressed regret to Kim over the collapse of their summit in Hanoi in February and stressed the need to improve bilateral relations and resume negotiations,” the “source” is quoted as saying. “As part of that he broached the idea of opening a U.S. liaison office.”