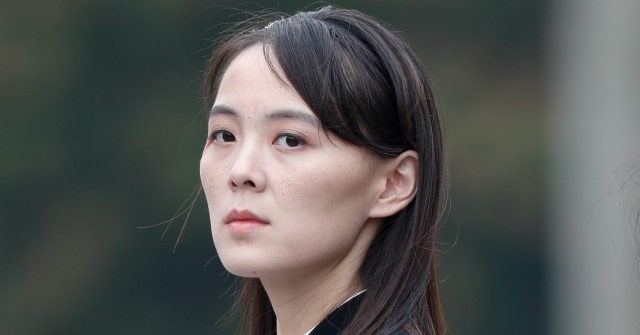 North Korea’s communist regime spent much of the weekend publishing vitriol against the South in its state media arms, declaring on Monday that unspecified “retaliatory measures” were on the way for Seoul. The measures will be “entrusted to our army,” Pyongyang asserted.

Last week, the regime stopped using a direct phone line established between it and the government of South Korea in 2018, insisting that diplomacy with South Korea was untenable unless South Koreans stopped sending humanitarian aid and leaflets with news about the outside world into the country.

North Korea bans citizens from consuming any media not created and approved by the communist government. To override that ban, many South Korean aid groups, including many with North Korean refugees participating, use balloons and other methods to flood the other side of the border with leaflets contradicting the false version of current events prevalent in North Korean propaganda journals. Among the falsehoods the leaflets regularly denounce are the claims that South Korea is destitute as a product of capitalism and North Korea is among the world’s wealthiest and most respected countries.

While this practice has gone on for years, Pyongyang abruptly began threatening violence in response to it this month.

The official national propaganda newspaper of North Korea, Rodong Sinmun, condemned the leftist South Korean presidential administration on Monday for its “weakness and incompetence” and threatened “retaliatory action” against the leaflets.

“We have already made a conclusion that there is no need for us to sit face to face with the south [sic] Korean authorities and discuss things with them any longer. What is left for us is to make them pay dearly for their heinous crimes,” Rodong Sinmun announced. “We have decided to take a series of retaliatory actions to punish the betrayers and human scum.”

Rodong Sinmun also announced the “destruction” of the joint liaison office between North and South Korea, which operates on their border and previously housed the direct phone line.

“As was declared, the north-south joint liaison office will come into destruction and the right to taking the next action against the enemy will be entrusted to our army,” the propaganda outlet stated. “Our invincible revolutionary armed forces will take a resolute action to take avenge on the enemies in order to allay the surging indignation of our people.”

Monday’s statement followed remarks on Saturday published by North Korean media and attributed to Kim Yo-jong, dictator Kim Jong-un’s sister, who is believed to be one of the most powerful people in the country. While it remains unclear exactly what the younger Kim’s responsibilities are in her brother’s regime, she was once known to run the “Propaganda and Agitation Department” of the communist government.

“By exercising my power authorized by the Supreme Leader, our Party and the state, I gave an instruction to the arms of the department in charge of the affairs with enemy to decisively carry out the next action,” Kim Yo-jong reportedly said. Like the Rodong Sinmun article, Kim mentioned the joint liaison office in the border town of Kaesong, asserting it would meet “complete collapse.”

“Our army, too, will determine something for cooling down our people’s resentment and surely carry out it, I believe,” Kim concluded.

In a press statement, Kwon wrote:

It is really preposterous to hear the balderdash of south Korean authorities-who do not have either any qualification to discuss, or the position to poke their noses into, the matters between the DPRK [North Korea] and the U.S., to say nothing of nuclear issues – are commenting on the resumption of DPRK-U.S. dialogue and interpreting the issue of denuclearization at their own choice.

The statement went on to say that “having been long forsaken like a good-for-nothing cucumber stalk thrown into swill, they should have now been aware too well of their sad lot, but it is really pitiful that they are still irrationally mouthing denuclearization, like a monk chanting the prayers.”

Rodong Sinmun also characteristically followed Kim Yo-jong’s remarks with a column threatening “to behead and dismember the heinous provokes who insulted the dignity of our supreme leadership dearer than the life [sic].”

“As the first-stage action representing their will, we took a measure of completely cutting off all the communication and liaison lines between the north and the south. This is the first sledgehammer blow at the fools who are still dreaming a day dream [sic], not aware of the seriousness of the situation,” the column read. The column was signed by the same author as the one published Monday.

According to the conservative South Korean newspaper Chosun Ilbo, the administration of leftist President Moon Jae-in held an “emergency meeting” Sunday to address Kim’s remarks. A spokesman for the presidential office confirmed the meeting but did not offer any details. On Monday, the Yonhap news agency reported that South Korean military operations on the border appear to have expanded for the prevention of any potential attack.

“We are closely monitoring North Korean military’s moves and are maintaining a firm military readiness posture. As of yet, there has been no incident to give additional explanations on,” Col. Kim Jun-rak, a spokesman for South Korea’s Joint Chiefs of Staff, said.

At press time, Moon’s response to the threats appears to largely be targeting South Korean pro-democracy activists with police action. After Kim Yo-jong first issued a belligerent statement last week against the distribution of pamphlets with facts about the outside world, leading to North Korea’s refusal to answer the direct line that the two countries had used for twice-daily phone calls for two years, Moon’s government chose to take tougher measures not on North Korea, but on the human rights activists. On Wednesday, Moon’s Unification Ministry announced legal action against two human rights organizations, Fighters for a Free North Korea and Keun Saem, largely led by North Korean defectors. The charges would stem from the distribution of factual leaflets. South Korea’s JoongAng Ilbo noted that the human rights groups may also lose permits to operate for having “infringed upon the public interest.”

“Fighters for a Free North Korea and Keun Saem sent some 500,000 leaflets, U.S. dollar bills and computer memory cards across the border on May 31,” the newspaper noted. Prior to the legal action against them, they had attempted to use water bottles to send rice to North Korea, where many citizens regularly face starvation, but their presence at a South Korean shore town resulted in scuffles that prevented the operation.

“We cannot allow a situation where the public feels threatened by North Korea as a result of [activists] sending provocative material to the North through balloons and other means,” Police Commissioner Min Gap-ryong insisted.

North Korea’s latest threats Monday come on the 20-year anniversary of a historic meeting between leaders of North and South Korea, which resulted in the signing of a joint statement expanding dialogue between the two countries.