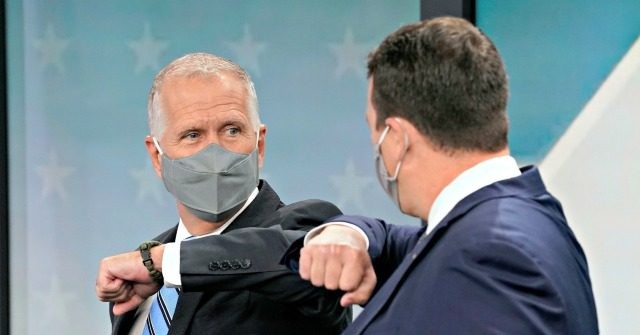 Likely North Carolina voters put Cunningham’s affair, control of the Senate, and Tillis’s support for President Donald Trump at the center of their thinking as to whom they will vote for in November.

Of those who say Cunningham’s infidelity is important, 80 percent say they will vote for Tillis.

The ABC News/Washington Post poll mirrors a recently released Emerson College poll, which found that Tillis leads by one point or 45 to 44 percent.

Meldrum said, “Cunningham really had a very neutral to positive sentiment about him not being a current elected official.”

“With the Supreme Court, you saw a dramatic benefit to Republican candidates when that time came up. It was something I think the base really got fired up about,” he added.

Tillis slammed Cunningham for refusing to address reports about whether he had a second extramarital affair. Tillis said:

Cal Cunningham’s refusal to deny a second extramarital affair serves as confirmation that he engaged in egregious misconduct in addition to what has already landed him under investigation by the Army Reserve. If Cal Cunningham cheats and lies while he asks for your vote, he will continue to cheat and lie as your U.S. Senator. North Carolinians deserve to know the full scope of Cal’s transgressions, and he needs to stop        hiding and start providing straight answers. The fact that Cunningham wants to avoid answering for his behavior for the next two weeks in order to win an election shows an unprecedented level of arrogance and self-centeredness that makes him unfit to be a public servant at any level.

The ABC News/Washington Post poll was conducted between October 12 and 17, surveying 646 likely North Carolina voters. The survey has a 4.5 percent margin of error.