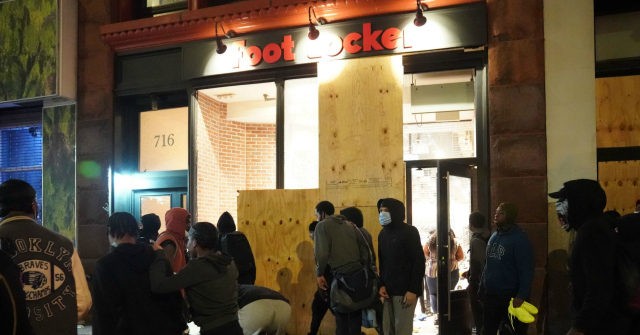 Things are about to change. Don’t worry: it won’t last forever. These things never do. It’s a phase, and if you fly over it at 30,000 feet, what you will see is that all this social justice-systemic racism-defund the police nonsense comes down to one thing… The Democrat Party is returning to its soft-on-crime roots, and in the end, this will not end well for Democrats.

Unfortunately, it’s going to take a while for voters to come to their senses. Things are going to get worse before they get better — thankfully, this worsening will be contained in Democrat-run cities.

Nevertheless, the radical left is now emboldened and have the Democrat Party, academia, the media, countless district attorney offices, the government bureaucracy, corporate America, and Hollywood on the run… So until things get better (and I promise things will get better), here’s my handy-dandy guide to surviving the coming era of social justice mob rule…

This isn’t an easy one to accomplish. I know because I’ve done it twice already. But you have to get out. The Democrats that run these cities did not only stand by as their cities were burned and looted, as predominantly black neighborhoods were burned and looted by predominantly white, left-wing terrorist groups like Antifa — these Democrats encouraged and continue to encourage burning and looting.

I’m sorry, but the cities are lost to us now, and will be for years…

When Democrats are releasing violent criminals, encouraging illegal immigration, and passing laws to disarm you while turning the police into eunuchs, it’s over… Minneapolis is preparing to disband the police. Los Angeles just slashed police funding. New York is gearing up to slash police funding. I’m telling you, it’s over…

So you have to get out now, especially if you own property because that property is about to become worthless.

This is not hyperbole. This is history repeating itself. The gangs and cartels are about to take over your city. Welcome back to the urban blight of the 1970s.

Now… If you’re a Democrat, you need to stay put. We don’t need you voting to Californicate the rest of the country.

You can try moving to the suburbs, I guess… But as your nearest Democrat-run city descends into hell, your taxes will explode. Plus, you’ll be funding rotting schools, potholes, corrupt Democrat political machines, and self-destructive social justice programs.

Also, eventually, the blight moves outside the cities and into surrounding areas. Let me put it this way… If you do move to the suburbs, be prepared to move again the moment you see graffiti. Graffiti is always the beginning of the end.

To those of us out here in Rural America, all this mayhem is just a reality TV show we like to call Toldjaso!

If you can afford private school, great. If the public schools in your area are not yet polluted with social justice propaganda, great. But you must be prepared to home school because with the left emboldened and almost entirely in charge of academia, the last thing public schools will be teaching is reading, writing, and arithmetic.

You need to keep a close eye on what your school is teaching because the left only wants to teach your kids to engage in loveless sex, the sanctity of abortion, why America is evil, that men are women and women are men, and that Global Warming is real. (It’s not.)

Be prepared to home school.

This is not a troll. This is not an attempt to be inflammatory. There’s only one reason the left-wing terrorists in Antifa and Black Lives Matter always-always-always focused their marauding in left-wing cities: they know the populace is defenseless.

These terrorists also know that once they move out into the suburbs, people are more likely to own guns.

And they damn well know Rural America is armed to the teeth, so they will never come out here.

Firearms are not only necessary for self-defense and for you to honor your primary responsibility in life, which is to protect your family and property; they’re an excellent deterrent. I own four firearms. Two are within reach of my bed. Peace of mind, baby.

It’s time to arm yourself.

I would also recommend obtaining a conceal carry permit.

Cable news is poison. Hollywood’s idea of entertainment today is either pushing sex on your children or straight-up propaganda. Why are you paying to pump this garbage into your home? What, you like paying $125 a month to have CNNLOL deliberately misinform you and then call you racist, to have MTV glorify degeneracy?

There are all kinds of streaming options out there, many of them free. You’ll save money, protect your kids, and best of all, push CNNLOL, MSNBC, and the rest one step closer to history’s dustbin.

I’ve written extensively on this. Please click here, here, and here — okay, that last click is to celebrate the weekend.

Six years ago, almost to the day, I was roundly laughed at for warning people to hold on to their hard copies of Blazing Saddles and Gone with the Wind.

You see, I’ve been around long enough to have learned one very important lesson about the left: no matter how outrageous the idea might sound at the time, the left — with the help of its media machine — will eventually mainstream that idea.

So when America’s leftists began to complain about classic films and television shows that are “problematic,” I knew it was only a matter of time… Well, the time has come.

Already, and even though he is innocent of the allegation, Woody Allen — one of our greatest living filmmakers — had his latest film blacklisted, along with his career. The Walt Disney Company has blacklisted its own Song of the South. The creator of The Simpsons has blacklisted an episode of his own show. The Library Journal published an article calling for a ban on books guilty of “whiteness,” whatever the hell that is. The Little House books are being burned.

And now the blacklisting push is ramping up….

Just this week, the far-left Washington Post demanded an immediate and total shutdown of all police movies and TV shows.

Legos is already blacklisting its own toys.

Let me tell you exactly how this is going to work…

The fascist mob is going to declare certain toys, books, movies, and television shows “problematic,” and these corporations, that are either cowardly or infested with social justice warriors, are going to disappear these things. “Problematic” books, movies, and TV shows will vanish off proverbial store shelves — physical and digital.

Another possibility is that they will be mutilated by censors. “Problematic” scenes, moments, characters, and words will be removed.

A couple of years ago, I decided to move my movie collection to digital. But after The Simpsons self-blacklister announced that digital copies would be scrubbed of the “problematic” episode, that even if you purchased the episode digitally, they were going to go in and remove it, I’ve gotten smarter. Even if I already have a digital copy, I went back and purchased hard copies of movies and TV shows that are wonderfully “problematic.”

Let me tell you right now, if you don’t own hard copies of Manhattan (and probably all of Woody Allen’s movies), Married with Children, Gone with the Wind, and pretty much every one of Normal Lear’s 1970’s sitcoms (All in the Family, Sanford & Son, etc.), you will eventually lose them.

Same with “problematic” books. Amazon will remove them from your Kindle.

The left-wing Antifa and Black Lives Matter terrorists will probably try to attack the suburbs and Rural America in an indirect way — going after power stations and the like. And if things get bad enough in the cities, we might see supply chains interrupted, so be prepared.

Listen, out here in Rural America, we’re going to be just fine. Don’t be stressed. Don’t live in fear — just be prepared. Being prepared is a great way to relieve anxiety.

Overall, and as I said earlier, the left is eating its own. Let them fight. Enjoy the show. It’s a total waste of time to try and care about people more than they care about themselves. Democrats are getting the blue on blue violence they voted for. It’s not your problem. It’s not my problem.

While Blue America reaps the whirlwind, the rest of us should clean our guns, grill meat, and enjoy Al Bundy taunting fat women.