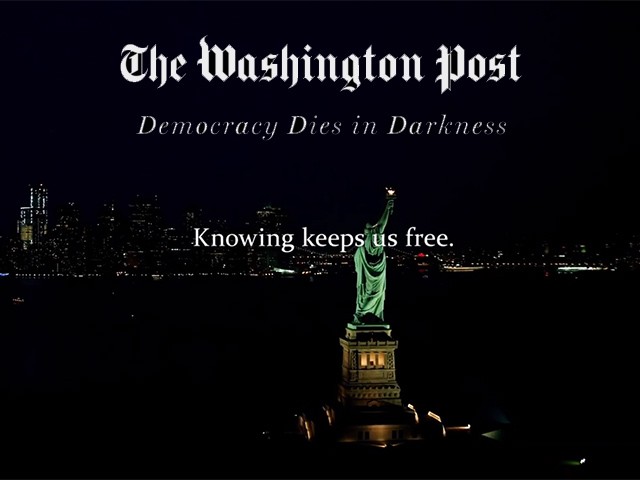 After some 1,200 people lost their media jobs last week, the far-left Washington Post spent $5.2 million to run a vanity ad during the Super Bowl.

You have to watch the Post ad to understand just how vacuous it is. What we have here is the highest form of propaganda narrated by a Big Movie Star (Tom Hanks), produced only to give you a chronic case of the FeelSoGoodz.

When we go off to war, when we exercise our rights, when we soar to our greatest heights, when we mourn and pray, when our neighbors are at risk, when our nation is threatened — there’s someone to gather the facts, to bring you the story — no matter the cost because knowing empowers us.

“Knowing helps us decide. Knowing keeps us free,” he added.

Notice how the ad’s only example of terrorism is Oklahoma City and not either attack on the World Trade Center or the Pentagon or any one of the more recent Islamic terror attacks on our homeland because democracy dies in darkness, or something…

Here’s my idea for a Washington Post ad that is actually fact-based, and I would like Robert Davi to narrate:

NARRATOR: Who do we count on to bring us the fake news from so-called reporters who call us “rubes,” to hand its Faith column to a practicing occultist, to publish the lies about the Russians hacking our electric grid, to blame President Trump for hurricanes, to sentence us to a lifetime of public harassment, to advocate for the hatred of all men, to call for violence against us, and smear innocent Catholic boys as Nazis…?

NARRATOR: Democracy doesn’t die in darkness — it dies in a brightly lit newsroom populated with hacks owned by a Silicon Valley megalomaniac who sends dick pics to his mistress.

My ad is also meant to give you a case of the feel goodz, but it also contains facts about the sorry state of journalism today.

a) tried to take health care insurance from part-time employees b) moved everyone toward riskier forms of health insurance.

His third and fourth tweets added to that list:

c) made it easier to lay people off d) cut their severance e) frozen their pensions and resisted the smallest enhancements to remaining retirement benefits until Sen. Bernie Sanders shamed it into doing so.

f) refused to add a single day of paid parental leave to its measly four weeks and g) must know that other media companies, sensing trouble ahead, have been trimming staff.