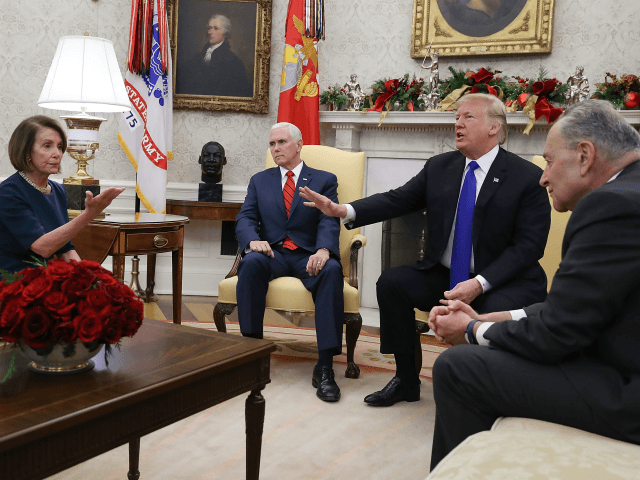 THE PRESIDENT: Chuck, did you want to say something?

SENATE MINORITY LEADER SCHUMER: Yeah. Here’s what I want to say: We have a lot of disagreements here. The Washington Post today gave you a whole lot of Pinocchios because they say you constantly misstate how much the wall is — how much of the wall is built and how much is there.

Trump then laughed at the notion that the far-left Washington Post, whose disgraced fact checkers are some of the most dishonest and partisan hacks not employed by CNN, are legitimate.

But none of that is the point.

The point is that the very first thing Schumer said during this meeting, the key message he wanted to send, is that Trump is weak on the border and lying about it.

No seriously, think about that.

As the 17-minute made-for-TV spectacle progressed, Trump boldly pledged to shut down part of the government — the part we can all live without that should be closed permanently anyway — if he does not receive adequate border security funding. Meaning, he would not sign on to continue funding the government.

All of this was a calculated set up on Trump’s part, and a successful one.

Pelosi had no idea she was being set up, which is why, like a prim schoolmarm always caught off guard, she chose to lecture Trump about the legislative process.

Schumer, though, is nobody’s stupe, and knew exactly what Trump was up to.

Trump can see the future and he knows it is going to be plagued with an orchestrated and well-funded campaign to create border chaos, to make him look feckless.

But what he did yesterday was flip the script. Here’s more:

SENATE MINORITY LEADER SCHUMER: You just said it is effective.

THE PRESIDENT: Can I tell you something?

THE PRESIDENT: These are only areas where you have the walls.

SENATE MINORITY LEADER SCHUMER: We want to do this —

HOUSE SPEAKER-DESIGNATE PELOSI: Wait a second. Let’s call a halt to this.

HOUSE SPEAKER-DESIGNATE PELOSI: Let’s call a halt to this. We’ve come in here as the first branch of government: Article I, the legislative branch. We’re coming in, in good faith, to negotiate with you about how we can keep the government open.

SENATE MINORITY LEADER SCHUMER: You’re bragging about what has been done.

THE PRESIDENT: By us.

SENATE MINORITY LEADER SCHUMER: We want to do the same thing we did last year, this year. That’s our proposal. If it’s good then, it’s good now, and it won’t shut down the government.

THE PRESIDENT: Chuck, we can build a much bigger section with more money.

In front of the whole world, on film, you have Trump demanding more border security, which includes his wall, you have Trump promising to shut down part of the government if he does not get the security requested…

You also have the two top Democrats in the country saying that what we have now is good enough.

Behind all of this are those leftists eager to organize and fund as much border chaos as possible.

Finally, you have voters, the American people, who now see border security as a national priority, second only to the economy.

Basically, now that Trump has America’s two top Democrats on video opposing additional border security, he can hang every incident — every caravan, every criminal act committed by an illegal, all the chaos, drug overdoses, rock throwing, and whatever else we are in store for over the next two years, around the neck of the Democrat Party.

This is a huge win for Trump, and there is no way he can lose. If Illegal immigration decreases, he takes the credit for his pro-active policies, and Democrats cannot claim he failed on his biggest issue.

If illegal immigration continues to surge, he can go to the Oval Office videotape for proof that Democrats are to blame.

Using border security, he will also be able to mercilessly pound away at whoever the left-wing extremist is Democrats choose to run against him in 2020.

Democrats and their media allies are trying to gaslight voters into believing illegal immigration is not a priority. They want those of us who believe it is to feel alone, outnumbered, and wondering if we are racists. This is all propaganda, and Trump is not falling for it.

Trump’s televised meeting was the first round of the 2020 presidential campaign, and Trump not only won that round, he did the body work that will pay off in the all-important later rounds.