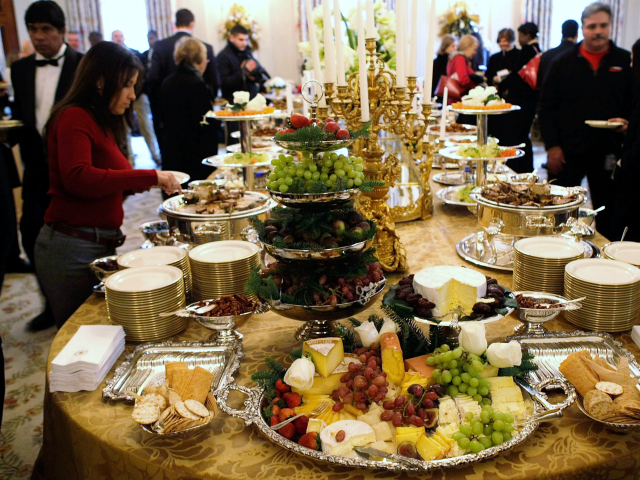 President Trump canceled the decades-old tradition of the White House hosting a Christmas party for the media, reports Fox News.

“President Trump has canceled the White House holiday party for the media, making the decades-old tradition a victim of his increasingly contentious relationship with major news organizations,” Fox reports.

“The annual Christmas-season gathering was a significant perk for those covering the White House, as well as other Washington reporters, anchors and commentators, and New York media executives would regularly fly in for the occasion,” Fox adds.

“Journalists who attended the events, which featured a catered buffet of lamb chops, crab claws and elaborate desserts, got to roam the decorated mansion with a spouse or other family member, a friend or a colleague, adding to the invitation’s allure.”

And after all this jet-setting and crab clawing happening on what I am assuming is the taxpayer’s dime, a line would then form as the president and first lady patiently spent two hours posing for photos with all of these serial liars in front of the Christmas tree. Or, as the media prefer to call it: The Winter Solstice Tree.

Because the taxpayers are likely funding this disgusting honoring of fake news elites, that alone makes it worse than a similar gathering — the execrable but annual White House Correspondents Dinner, where the elite media pretend to raise money for scholarships as it awards its left-wing self left-wing awards awarding left-wingism.

Fox News adds that,  “While dropping the media party, the White House is in the midst of a full panoply of other parties this holiday season. Selected media people generally favorable to Trump, including a few Fox News hosts, have made those guest lists.”

That should not be happening, either.

The problem with these events, most especially pre-Trump, is watching the establishment media honored and feted as though they are not the worst people in the world.

The phoniness of this charade is galling.

Even the Academy Awards are not this bad. At the very least, those receiving an Oscar have at least  accomplished something, created something.

The media, however, accomplish and create nothing; nothing but hot air, hate, chaos, horrible predictions, low ratings, left-wing opinions, sanctimony, and lies. Other than our divided country and the smoldering ruins of Ferguson and Baltimore, what do the media have to show for their terrible selves?

Thank God for Trump, then, who refuses to play along.

All our media deserve is contempt. And the more of this contempt Trump heaps on them, the more I want to gay-marry him.