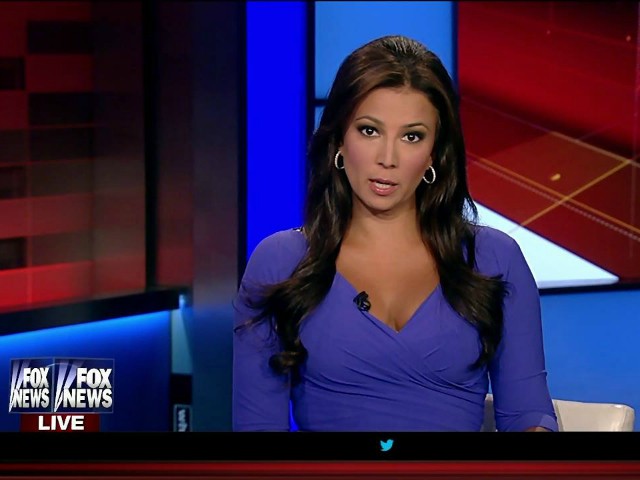 Fox News anchor Julie Banderas responded to criticism from Breitbart News by engaging in the transphobic act of assuming a person’s gender.

On Monday, Banderas had a public meltdown when– Oh, wait, Banderas claims the word “meltdown” is sexist…

On Monday, Banderas totally, like, freaked out after President Trump tweeted some mild criticism at a couple of Fox News reporters.

In a series of three tweets, Banderas melted dow– err, made a spectacle of herself.

Her screechy and overheated tweets– Oh, wait… Banderas believes the words “screechy” and “overheated” are sexist…

Her shrill and neurotic* tweets were something right out of the leftist playbook that seeks to silence people through the pathetic act of declaring speech dangerous or bigoted.

Breitbart News published my criticism of Banderas’s public butt-baring on Tuesday. On that same afternoon, Banderas chose not to respond to the substance of my criticism. Rather, she sought to silence me, this time by screec– er, by bleating about SEXISM.

“‘Screechy,’ ‘Overheated,’ ‘Melt Down?’ Fascinating but I’m actually as mellow as news anchors come,” Banderas tweeted. “My question is, would these descriptions be used to describe my speaking up if I were a man? I‘m going to venture a guess. No.”

⁦@BreitbartNews⁩ “Screechy,” “Overheated,” “Melt Down?” Fascinating but I’m actually as mellow as news anchors come. My question is, would these descriptions be used to describe my speaking up if I were a man? I‘m going to venture a guess. No. https://t.co/xg0PTWpz9D

Banderas obviously knows that I am the one who wrote the piece, and here she is accusing me of sexism, but the only way she can make that accusation is if she assumes my gender.

Transphobia is already a serious problem in America, and for a high-profile Fox News anchor to assume someone’s gender based solely on a first name and full beard… Maybe Fox needs to think about some sensitivity training.

*In my original piece, I described CNN’s Jim Acosta as “neurotic,” so any claim this is a sexist term is absurd. My only regret is my failure to describe Acosta as “high-strung” and “brittle.”