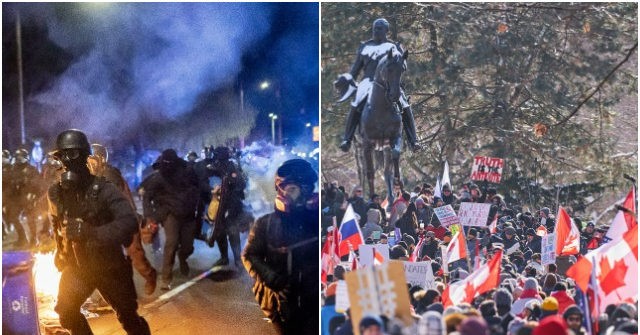 Other than watching Adolph Trudeau react to the Freedom Convoy like a mewling little gerbil, my favorite part of the trucker protests has been sizzling hot takes like this:  Wait, Now the Right Loves Traffic-Blocking Protesters?

It truly is an astounding act of mental midgetry…

Let’s begin with the obvious… The least of the sins committed by the domestic terrorists in Black Lives matter is blocking traffic. For most of 2020, these violent marauders burned, looted, beat, and destroyed — much of the time in predominantly black neighborhoods. These monsters caused a record amount of property damage, and much of that property was owned by working people. Oh, and now tens of millions of dollars in Black Lives Matter donations remain *lol* unaccounted for.

The Freedom Convoy burned, looted, and beat … nothing and no one. No violence of any kind, just video after video of a block party atmosphere, of everyday people having a good time — a sight our elites hate even more than themselves.

The Freedom Convoy also did its level best to target their protests at the government. Compare that to the terrorists in Black Lives Matter, who mostly rampaged against business districts and targeted innocent retailers, including mom and pop stores, for total destruction.

As far as the traffic blocking, let’s look squarely at that…

Would you prefer to deal with a vicious and violent mob swarming your car — which is how Black Lives Matter blocked traffic — or a truck just sitting there?

I’m not saying the Freedom Convoy isn’t inconveniencing everyday people. Of course it is. The honking, the traffic issues… But it is peaceful. And guess who else blocked bridges and inconvenienced everyday people? Rev. Martin Luther King. There is a long and glorious history of civil disobedience in Western culture. All the Freedom Convoy is guilty of is proudly picking up that baton and running with it.

Let me add that the Freedom Convoy’s blocking of a crucial bridge between the U.S. and Canada was every bit as strategic and righteous as the Civil Rights protests on Edmund Pettis Bridge 57 years ago.

And let’s not forget who invented this suddenly-insidious idea of traffic blocking, who normalized traffic blocking as a legitimate form of protest. That was Black Lives Matter, along with their cheerleaders in the organized left, the Democrat party, and the corporate media.

Hey, once something is normalized and accepted as legitimate, why shouldn’t everyone join in?

What exactly does Black Lives Matter want? What is their list of demands? There are none.

The Freedom Convoy is fighting for the same rights rich celebrities at the Super Bowl and Oscars enjoy.

Black Lives Matter literally wants you on your knees.

Finally, let’s look at what’s on the line…

Besides upgrading their home entertainment systems, what exactly does Black Lives Matter risk? Nothing. They are almost all professional activists, criminals, and students. What’s more, they can commit the most heinous of crimes, get arrested, and immediately be set loose by far-left prosecutors and Kamala Harris’s bail fund.

Compare that to these truckers who are working-class guys with bills to pay, families to feed, and who showed up with their own rigs, which were at risk of government confiscation. These guys lost wages, incurred massive expenses, and agreed to participate, knowing the corporate media and their own government would smear them as terrorists and Nazis.

And now my closing argument: