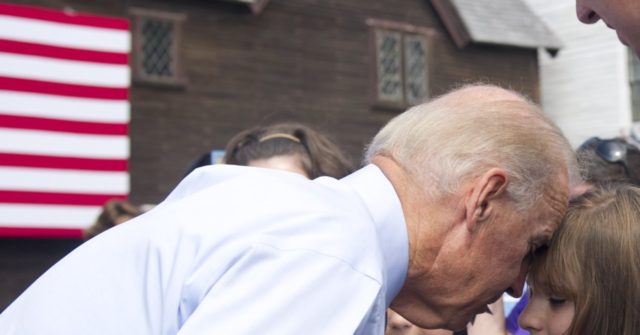 Joe Biden’s spokesman Bill Russo is desperately hoping his cry of fake right-wing news will save his boss’s presidential aspirations, which are presently being slow-cooked over a fire made of karma.

And the karma is burning so well, a second Biden accuser came out just hours after Russo’s statement.

And I say a “time bomb” because it was only a matter of time before the Serial Young Girl-Toucher’s serial young girl-touching would reach critical mass.

The fake news media could only cover this up for so long. And throughout Obama’s failed administration, they not only did, they did so successfully, either by ignoring all the serial young girl-touching or laughing off Uncle HandsyMcHairSniffer.

There’s Uncle Joe shoving his schnozz into a woman’s hair.

There’s Uncle Joe going for the unwanted kiss on a very uncomfortable child.

My wife and I were discussing this last night…

…after the woman involved, Stephanie Carter, said Biden did not make her uncomfortable. She went on to explain that Biden is an old family friend and that she felt comforted by his meaty hands and swaggering nuzzle.

My wife’s response was, “So what? What kind of husband behaves that way with another women?”

Then she turned to me and said, “I’d kill you.”

Yet another example of how all husbands pay for the bad husbands.

Anyway, Biden’s spokesman is hoping to wish away Biden’s serial young girl-touch problem by blaming the “right wing trolls and others [who] continue to exploit … smears and forgeries [that] have existed in the dark recesses of the internet for a while.”

“Perhaps most galling of all,” he adds, “a cropped photo of the Vice President comforting his grandson” at Beau Biden’s funeral.

But Russo could only offer TWO “insidious examples” of photoshopped photos, both of which I have personally never seen, and I say that as a platinum cardholder of the dark recesses of the Internet.

That might actually work with the fake news media because that is exactly the kind of chum a corrupt outlet like CNN will use to distract away from a legitimate story damaging to a Democrat.

The only problem with that ploy, though, is that it is no longer 2008, which means the fake news media no longer hold a monopoly on information, which means these photo will be out there forever, and the worst ones are not photoshopped.

But they are all kinds of creepy, and they are perfect for devastating series of campaign ads that will keep Biden on defense right up until the moment President Trump is sworn in for a second term.

Hey, and if you think Joe’s behavior is okay and you are not a powerful Democrat protected by the media, try it…

Go ahead, prove us all wrong and try it.

No, really, go to work today, slither up behind Sally Mae as she’s making copies, slide your hands over those soft shoulder, lean in, take a whiff, and then plant one of her.

And then do it to Sally Mae’s daughter at the company picnic.

None of this behavior has been okay since 1991, since Anita Hill. I know. I remember the company memos. And so does the Serial Young Girl-Toucher.