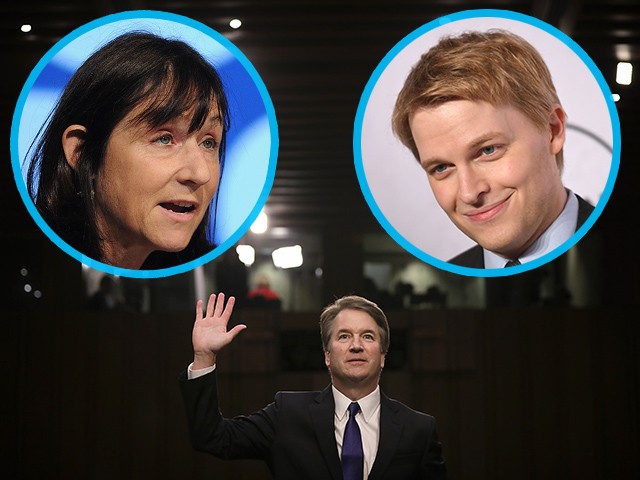 The New Yorker’s Ronan Farrow and his co-author Jane Mayer are under fire for publishing a second allegation of sexual misconduct against Supreme Court nominee Brett Kavanaugh. When you look at how thin the story is, that criticism might be valid.

But Farrow (pictured, top right) and Mayer (pictured, top left) deserve credit for writing the full story — a story that not only appears to debunk Deborah Ramirez’s allegation but exposes how the institutional left is aggressively working behind the scenes to destroy Kavanaugh with spurious accusations.

After 35 years of not being sure it was him, Ramirez now alleges that during a drunken dorm party during her and Kavanaugh’s freshman year at Yale in 1983, he exposed himself to her in such an aggressive way she ended up accidentally touching his genitals.

Obviously, this is a sensational allegation, and the timing is more than a little suspicious. The story appeared on Sunday night just as Christine Blasey Ford’s allegations against Kavanaugh began to unravel.

Just a few hours earlier, the last of Ford’s three witnesses, including a lifelong friend, had not only said (under penalty of imprisonment) they do not recall any misconduct on Kavanaugh’s part, they do not even recall attending the 1982 house party where the misconduct supposedly occurred.

If anything, though, Ramirez’s story is even less credible.

Like Ford, neither of Ramirez’s witnesses recall the party or the alleged incident, nor does her best friend. What’s more, until Ramirez spent six days with her Democrat lawyer, she was unable to identify Kavanaugh as the man who exposed himself.

Because of Ramirez’s memory problems (she was also quite drunk at the alleged party) and her supposed witnesses stating none of this ever happened, some argue the New Yorker was irresponsible to publish. In fact, the New York Times found the story so lacking in credibility, the paper chose not to publish.

But were it not for the New Yorker, we would not have learned how Democrats are willing to manipulate events behind the scenes in their ongoing effort to destroy Kavanaugh with unsubstantiated allegations from more than 30 years ago.

The New Yorker informs us:

In her initial conversations with The New Yorker, she was reluctant to characterize Kavanaugh’s role in the alleged incident with certainty. After six days of carefully assessing her memories and consulting with her attorney, Ramirez said that she felt confident enough of her recollections to say that she remembers Kavanaugh had exposed himself at a drunken dormitory party, thrust his penis in her face, and caused her to touch it without her consent as she pushed him away.

In other words, a full 35 years after the incident occurred, Ramirez (who the New Yorker describes as an activist Democrat) could not put the finger on Kavanaugh as the alleged flasher.

Moreover, we learn “Ramirez acknowledged that there are significant gaps in her memories of the evening” and that at the party she “became inebriated” and “was on the floor, foggy and slurring her words.”

Nevertheless, after all this time, over the past few days, she became sure it was Kavanaugh thanks to “carefully assessing her memories and consulting with her attorney.”

Thanks to the New Yorker’s in-depth reporting, however, we know exactly who the attorney is who helped Ramirez recall her memory — “Stanley Garnett, a former Democratic district attorney” from Boulder, Colorado.

And then there is the role Senate Democrats played…

Appearing on Good Morning America Monday, Farrow disclosed that Senate Democrats instigated this by reaching out to Ramirez, who had no intention of reporting the incident because she was not sure it was Kavanaugh. One of the primary reasons she came forward, according to Farrow, is that she feared Democrats would tell the story for her.

“She felt it was important that she tell her story before others did without her consent because so many people on [Capitol] Hill were looking at this,” Farrow said.

Farrow also admitted there are no eyewitnesses of this incident.

In fact, as the New Yorker reports, the two people named by Ramirez as witnesses state the incident never happened:

One of the male classmates who Ramirez said egged on Kavanaugh denied any memory of the party. “I don’t think Brett would flash himself to Debbie, or anyone, for that matter,” he said. Asked why he thought Ramirez was making the allegation, he responded, “I have no idea.” The other male classmate who Ramirez said was involved in the incident commented, “I have zero recollection.”

Additionally, Ramirez’s own best friend at the time says she knew nothing about this:

“This is a woman I was best friends with. We shared intimate details of our lives. And I was never told this story by her, or by anyone else. It never came up. I didn’t see it; I never heard of it happening.” She said she hadn’t spoken with Ramirez for about ten years, but that the two women had been close all through college, and Kavanaugh had remained part of what she called their “larger social circle.” In an initial conversation with The New Yorker, she suggested that Ramirez may have been politically motivated. Later, she said that she did not know if this was the case.

Then there are the three classmates who also back Kavanaugh’s claim:

Dino Ewing, Louisa Garry, and Dan Murphy, disputed Ramirez’s account of events: “We were the people closest to Brett Kavanaugh during his first year at Yale. He was a roommate to some of us, and we spent a great deal of time with him, including in the dorm where this incident allegedly took place. Some of us were also friends with Debbie Ramirez during and after her time at Yale. We can say with confidence that if the incident Debbie alleges ever occurred, we would have seen or heard about it—and we did not. The behavior she describes would be completely out of character for Brett. In addition, some of us knew Debbie long after Yale, and she never described this incident until Brett’s Supreme Court nomination was pending. Editors from the New Yorker contacted some of us because we are the people who would know the truth, and we told them that we never saw or heard about this.”

The only person backing Ramirez is someone who refuses to be named and who allegedly heard about the flashing incident through a second-hand source:

A classmate of Ramirez’s, who declined to be identified because of the partisan battle over Kavanaugh’s nomination, said that another student told him about the incident either on the night of the party or in the next day or two. The classmate said that he is “one-hundred-per-cent sure” that he was told at the time that Kavanaugh was the student who exposed himself to Ramirez.

During her own appearance on CBS This Morning, Mayer stated that this person was not a witness, but someone who “heard it from someone who was there.” But we do not know who that someone is, and both the New Yorker and the New York Times aggressively tried to reach out to anyone who was part of this circle.

Another former student remembered hearing about an incident regarding an exposed penis but did not remember either Kavanaugh or Ramirez being attached to it:

Richard Oh, an emergency-room doctor in California, recalled overhearing, soon after the party, a female student tearfully recounting to another student an incident at a party involving a gag with a fake penis, followed by a male student exposing himself. Oh is not certain of the identity of the female student.

But again, the only actual witnesses told the New Yorker it never happened, that Kavanaugh did no such thing, and that they witnessed no such thing.

Kavanaugh himself unequivocally denies the incident and called it a “smear.”

For its part, on Monday morning, the left-wing New York Times corroborated the New Yorker’s reporting about Ramirez’s own witnesses contradicting her account, plus her troubling memory issues:

The Times had interviewed several dozen people over the past week in an attempt to corroborate her story, and could find no one with firsthand knowledge. Ms. Ramirez herself contacted former Yale classmates asking if they recalled the incident and told some of them that she could not be certain Mr. Kavanaugh was the one who exposed himself.

Meanwhile, despite the facts, Democrats are still working behind the scenes to turn a fuzzy 35-year-old memory into one that perfectly fits their agenda to destroy this man.

Had the New Yorker not published the complete story, we would not know any of this, and I cannot think of anything more newsworthy.