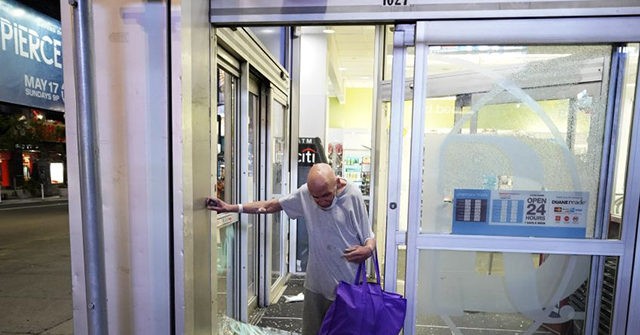 We like to believe we’re living in unprecedented times, but we aren’t. The left is just rioting, looting, and burning like it’s 1968; and the Democrat Party is appeasing the rioters and going soft on crime like it’s 1968.

Trust me, there is nothing new under the sun, much less a gang of spoiled crybabies abusing a cause to justify their marauding, much less a Democrat Party believing they can harness that power to electoral victory, much less a corrupt media aiding and abetting it all.

No serious student of history will tell you we’re not watching a rerun.

And no serious student of history will tell you that, if past is prologue (and it always is), this will end well for Democrats.

That’s not to say President Trump will benefit. He’s president now, and voters might very well blame him for the unrest, might believe (mistakenly — as I’ll explain below) Joe Biden can usher in calmer times. As the polls show, Trump’s refusal to project calm and steadiness is not helping his case. When Trump most needs to act presidential, he either can’t or won’t, but that’s all beside the point. This is a long game we’re talking about here. Here are a couple of examples…

In the end, all the social unrest of the 60s turned the country to the right. For 20 out of 24 years, from 1968 to 1992, a Republican was president. And Democrats were only able to recapture the White House in 1992 because Bill Clinton ran as a New Democrat, especially when it came to being tough on crime.

What’s more, the only reason Democrats captured four of those 24 years was Watergate. Nevertheless, Jimmy Carter was still one-and-done.

In 1994, New York City had suffered through horrific decline and ruin after 20 years of soft-on-crime Democrat rule. The result was that one of the most left-wing cities in the country elected and then overwhelmingly reelected Republican Rudy Giuliani, who ran almost exclusively as a crimefighter. Giuliani was so successful that in 2002, the only way Mike Bloomberg could become mayor was to run as a Republican.

But as decades of quiet and calm domestic life wore on, people forgot why life was so good, forgot what it was like before, and here we are…

In 2014, 20 years after Giuliani was elected, New York took the good life for granted and made Bill de Blasio mayor, a soft-on-crime radical who’s already driven the city back into the dirt.

Nationwide, in 2008, after decades of domestic peace at the hands of conservative presidents (including Bill Clinton) and a relatively conservative Democrat Party, the country forgot how bad things had been in 1968, and voted to make Barack Obama, a radical leftist, president.

And what did Obama and his radical Democrats deliver? A return to the era of riots and social unrest.

It all started when Obama and Democrats embraced Occupy Wall Street — which has now morphed into the left-wing terrorists in Antifa and Black Lives Matter. On top of that, in order to create racial strife (that had nearly disappeared) and the false impression America is racist, Obama and Democrats embraced the Trayvon Martin, Hands Up, Don’t Shoot, and Baltimore hoaxes.

So here we are, welcome to 1968, where Democrats are now so radicalized they’re releasing violent criminals into their cities, encouraging illegal immigration into their cities, calling for the police to be defunded, dropping to their knees to plead for forgiveness for being white, and defending wanton rioting, looting, and lawlessness. But…

It can only end in electoral disaster.

To begin with, Democrats do not have the tiger by the tail. They cannot appease these mindless terrorists into behaving. Sorry, but you will never appease gangsters who have no demands and no goals, other than to wreak havoc. Appeasement is weakness; weakness invites aggression, and that means (just as we saw in the 60s), the crime and social unrest in these Democrat-run cities is only going to get worse, and as it does, the Democrats will find themselves in an electoral box there is no escape from.

Just as they did around the country in 1968 and in New York in 1994, eventually enough Democrat voters are going to get so sick and tired of the filth, crime, and unrest, they will demand something be done about it. But…

This leaves only one option: Hold your nose and vote for a Giuliani.

This isn’t going to happen overnight, but it will happen.