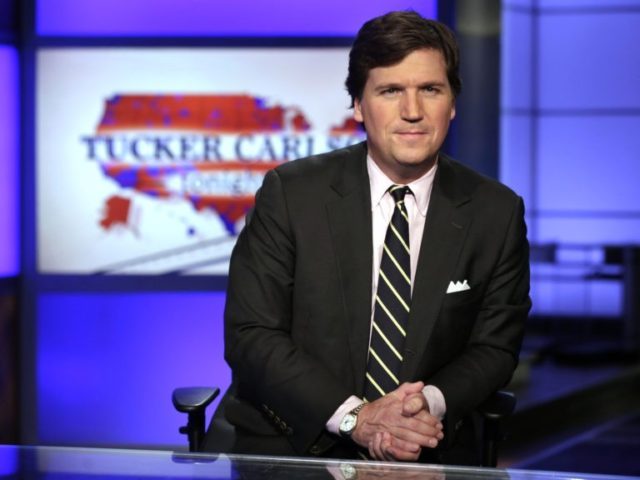 CNN was on a crusade to demonize Tucker Carlson as a racist in the days and weeks leading up to the left-wing terrorist group Antifa’s Wednesday night attack on the Fox News anchor’s home.

According to the official police report, and while Carlson’s wife was home alone, “a group of approximately 20 people” assembled “in front of her home. They had a bullhorn and were chanting loudly.”  The police found “an anarchy symbol” spray painted on the driveway. “Signs were left on vehicles left in the driveway as well as a sign left on the front door.”

Prior to calling the police, Carlson’s wife of 22 years “reports she heard loud banging and pounding on her front door.”

The incident is being investigated as a politically-motivated hate crime.

The group claiming responsibility is Smash Racism DC, a part of Antifa. Video posted by the group shows they mobbed the home after dark and used a bullhorn to threaten Carlson and his family. “Racist scumbag, leave town!” they screamed, along with: “Tucker Carlson, we will fight! We know where you sleep at night!”

One protester can be heard wishing she had brought a “pipe bomb.”

The terrorist group posted the harrowing video on their own (now suspended) Twitter account with an even darker threat: “Tonight, we remind you that you are not safe either.”

Carlson adds that the terrorists “rang his doorbell, broke his oak door” and that, fearing a home invasion, his wife “called the police and locked herself into a pantry.”

The terrorists also blocked both entrances to the street and carried signs with his home address.

This unprecedented assault on a media commentator’s home occurred just after the far-left CNN had been relentlessly targeting Fox News and Carlson in what can only be described as a campaign of personal demonization.

A good faith search of CNN.com found some half-dozen attacks against Carlson in less than three weeks, between October 10 and November 1.

As you will see, these CNN articles are not rebuttals to Carlson’s political positions, are not op-eds arguing beliefs, are not the stuff of competing ideas, but rather blistering attacks on his humanity and through the prism that his “white anxiety” has twisted him into a bigot spreading the kind of hate  that influenced the murderer who shot up a Pittsburgh synagogue last month.

CNN appeared to lay the foundation for its racist assault on Carlson with an article published September 28 titled: “White anxiety finds a home at Fox News.” This “news” piece focuses primarily on Carlson and his Fox News colleague Laura Ingraham:

The Fox News audience is almost 100% white, according to Nielsen. And on the channel’s highest-rated shows, the politics of white anxiety play out practically every day, as hosts and guests warn about the impacts of immigration and minimize or mock the perspectives of people of color. The talk show segments are clearly intended to appeal to people who perceive they are losing their grip on power.

White supremacist websites express anger over the changes in far more hateful and hostile ways than anyone on television does.

But Fox is often perceived to be giving voice to those views.

A little over two weeks later, on October 16, the assault on Carlson began in earnest when CNN accused Carlson of “laying the groundwork for an authoritarian agenda.”

[T]he GOP is taking another step toward abandoning democracy altogether, and laying the ideological groundwork for an authoritarian agenda, no matter who wins in November’s midterms.

Right-wing Fox television personality Tucker Carlson also characterized people chanting in a restaurant to protest Texas Sen. Ted Cruz as a “mob.” In response to Eric Holder quipping that when Republicans go low, Democrats should “kick them,” Carlson warned darkly that Democrats would soon take up shooting and burning.

I channel-surfed on Thursday night. Fox’s Tucker Carlson led his 8 p.m. hour with an anti-immigration spiel, with banners that read “MASSIVE MIGRANT CARAVAN ON THE WAY,” “MIGRANT CARAVAN KEEPS GROWING,” and “4,000 CENTRAL AMERICANS MARCH TO US BORDER.”

A week later, CNN openly blamed Carlson (among others on the political right) for a string of pipe bombs mailed out to prominent left-wingers last month.

“Words matter. And here’s one way to gauge their impact,”  CNN writes before naming the people targeted.

“What do the targets have in common?” CNN asks.

The answer: “They’ve all been targeted by President Donald Trump and made into bogeymen for the far-right, often on Fox News by opinion anchors like Sean Hannity.”

CNN helpfully points out that Carlson has mentioned Hillary Clinton (one of the pipe bomb targets) “more than 290 times” since Trump’s inauguration.

A mere three days later, on October 30, the smear campaign against Carlson went into hyper-drive. In a piece titled “Pittsburgh suspect echoed talking point that dominated Fox News airwaves,” the left-wing outlet — without evidence — openly ties the monster who shot up a synagogue in Pittsburgh last month to Fox News and Carlson, specifically:

In the search for answers after the Pittsburgh synagogue shooting, there is newfound scrutiny on the suspect’s social media posts and how his anti-Semitism merged with a hatred of immigrants.

The suspect [name redacted] complained about immigrant “invaders” six days before the shooting.

It may never be known where he heard this hateful language. But a review of television and online content shows how “invasion” and “invaders” became a talking point in October — not just in the darkest corners of the web, but on Fox’s prime time shows.

Within days of the new caravan’s formation in Honduras, Fox News hosts and Republican congressmen were using dehumanizing language and casting the migrants as an imminent threat.

Fox’s Tucker Carlson referenced an “invasion” as early as October 16.

The following day, on October 30, CNN again attempted to tie Trump’s talk about the migrant caravan to the shooter. And nowhere does the piece mention that this monster despised Trump, specifically for the president’s openly pro-Jewish and pro-Israel beliefs and policies.

And again, without a shred of evidence, the piece ties Carlson’s coverage of the caravan to the overall theme that this coverage inspired the Pittsburgh massacre:

[Trump’s] talking about a migrant “invasion” at the southern border while authorities examine the Pittsburgh shooter’s hatred of “invaders” and Jews.

On MSNBC’s “All In,” Michelle Goldberg said, “Trump has not only created this big lie about the caravan that has inspired mass murder, but he is now shifting the resources of government to instantiate his lie.” At the same time on Fox, Tucker Carlson reassured his viewers that “the migrant caravan is a real thing…”

Two days later, on November 1, Carlson is named by CNN as an enabler of racism in a piece titled, “Trump’s racist video is part of a broader GOP midterm strategy aimed at the conservative base.”

Keep in mind that the above is only what CNN has written about Carlson. Articles of this kind are usually promoted endlessly on CNN’s airwaves and  through endless segments of partisan commentary (e.g., the video embedded at the top here)  — not to mention social media:

Tucker Carlson slamming media/politicians on immigration crisis claiming, “No matter what they tell you this isn’t about helping children …. They’re goal is to change your country forever.”

Tucker Carlson is doing what he often does: suggesting politicians and media care more about the children of “foreign nationals” who enter US illegally than they do about American children.

What’s more, in recent weeks, the anti-Trump channel has accused Carlson of ginning up hate, has devoted  an entire primetime segment to attacking Carlson as a racist, as no different from the southern racists who used “bullhorns and water hoses,” as part of a “vein of white nationalism.”

In July, a CNN headline had already declared Tucker a racist.

Even in CNN’s coverage of the Antifa attack on Carlson’s wife and home, he is attacked as a “white supremacist.”

The piece says, “Carlson, one of the top hosts on Fox, is a top target of progressive critics. They say Carlson supports white supremacy through his commentaries and programming choices — a charge he flatly denies.”

Above all, though, CNN has been a longtime apologist for Antifa and has openly supported the harassment of people on the political right.

When Smash Racism DC (the very same Antifa group that terrorized Carlson’s wife) mobbed Sen. Ted Cruz (R-TX) and his wife in a Washington DC restaurant six weeks ago, CNN’s Don Lemon said, “It goes with the territory … that’s what he signed up for. That’s part of the deal.”

Over the summer, CNN’s Chris Cuomo launched a vigorous defense of the left-wing terrorist group Antifa and their use of violence.

He continued, “That’s why people who show up to fight against bigots are not to be judged the same as the bigots, even if they do resort to the same kinds of petty violence.”

And then, a mere six weeks later, CNN launched a vigorous campaign to  tar Carlson as a bigot, as a racist … as someone who it is “right” for Antifa to “fight.”