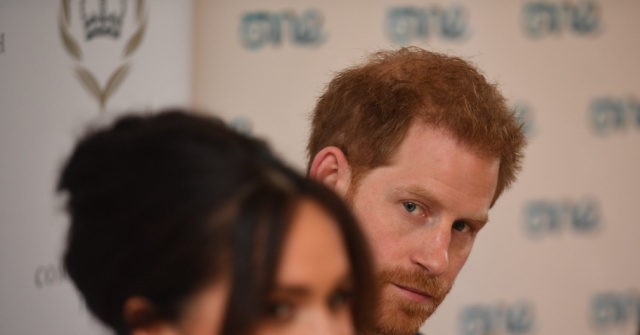 Meghan Markle is stuck with Prince Harry, who is quite obviously the worst husband in the world and a total failure as a man.

Full disclosure: I did not watch Oprah Winfrey’s interview with the Duke and Duchess of Sussex aka Harry and Meghan. There are just too many options out there (like Hogan’s Heroes reruns) to sit through our broken culture’s latest edition of Race-Hoaxing Billionaire Interviews the Rich & Privileged About Their Boo-Hoo Problems.

In fact, despite all the news about “high” ratings for the interview, the truth is we now grade TV ratings on such a dishonest curve you would never know more than 90 percent of Americans did not watch Race-Hoaxing Billionaire Interviews the Rich & Privileged About Their Boo-Hoo Problems.

Nevertheless, because the coverage of Race-Hoaxing Billionaire Interviews the Rich & Privileged About Their Boo-Hoo Problems was omnipresent, there was no escaping highlights of the interview, and I have to say based on those (and my subsequent reading of the transcript), my primary takeaway is that 36-year-old Harry is the worst husband in the world, a total failure as a man, who should be ashamed of himself, who needs to do better — much better.

As a husband, your primary job to protect your family. Yes, you have other jobs — taking out the garbage and opening pickle jars — but all other husband-jobs pale in comparison to your primary job, which is to protect your family, most especially your wife. And it’s not just about protecting her from marauders and bike gangs. Your job (and privilege) is to protect her in every way. Your job is to ensure your wife always feels secure, always enjoys peace of mind, is always safe, and always knows she has the heavyweight champion of the world in her corner ready to go.

I can’t address every complaint the 38-year-old Markle made against the Royal Family, but after a week of involuntarily digesting all the highlights, there is no doubt in my mind Harry failed her at every turn.

Let’s start with some important context…

The first thing to keep in mind about Harry and Meghan is they are filthy rich. In other words, this is not a family lacking resources. Since leaving the Royal Family, they have moved into a $14.7 million home and have millions more in the bank. Are they Big Tech rich? Are they Queen Mother rich? No. But compared to us commoners, they are set for life. Anything any reasonable person could want is theirs for the asking. I don’t say this to play class warfare; I say this because no amount of help Meghan said she needed was out of Harry’s immediate reach.

Examples of how Harry is The Worst Husband In the World…

Meghan complained a lot about how lost, awkward, and unprepared she was navigating the complexities of royal life. She was so unprepared, she did not even know she was supposed to curtsy when she met the Queen in private:

Sunday’s interview special opened with Meghan describing how naive she was about the ground rules of royal life before she married her husband, Harry, nearly three years ago. “I didn’t fully understand what the job was,” she said. She also noted that she did not know how to curtsy before meeting Queen Elizabeth II for the first time, and didn’t realize it would be necessary.

Why would Harry, who was a 33-year-old man at the time, throw his 35-year-old wife-to-be to the wolves like this? I only mention their ages to point out that we are not talking about children. It is simply beyond my comprehension that Harry would do something so seemingly cruel and sadistic, would put his future wife in a position where she might make a fool of herself.

If the two of them were serious enough that it was time to meet the Queen, a good man who truly loved this woman would have done whatever it took to prepare her, to make her feel secure, to give her the peace of mind of knowing all the protocols beforehand. What in the world is wrong with this guy?

Meghan says she didn’t feel “protected” in the family:

I did anything they told me to do — of course I did, because it was also through the lens of, “And we’ll protect you”. So, even as things started to roll out in the media that I didn’t see — but my friends would call me and say, “Meg, this is really bad” — because I didn’t see it, I’d go, “Don’t worry. I’m being protected”. I believed that. And I think that was . . . that was really hard to reconcile because it was only . . . it was only once we were married and everything started to really worsen that I came to under-stand that not only was I not being protected, but they were willing to lie to protect other members of the family but they weren’t willing to tell the truth to protect me and my husband.

Where the hell was Harry during all this? If members of my family, if anyone was lying about my wife, I’d be on rampage including, if necessary, a very public rampage. Harry’s job is to be her champion and protector. His job, most especially because this is his family and his world, is to protect her and make damn sure if someone disrespects or hurts or makes her uncomfortable, they pay the kind of price they know the sin is not worth repeating.

Who lets their wife twist in the wind like this? A selfish, cowardly loser, that’s who.

Meghan suddenly found herself in a world where she was “silenced”:

Meghan: I’ve always valued independence. I’ve always been outspoken, especially about women’s rights. I mean, that’s the sad irony of the last four years . . . is I’ve advocated for so long for women to use their voice, and then I was silent.

Meghan: The latter. … Everyone from . . .  everyone in my world was given very clear directive, from the moment the world knew Harry and I were dating, to always say, “No comment”. That’s my friends, my mom and dad.

Why didn’t Harry prepare her for this before she was committed to him? Why didn’t he explain to her as soon as their relationships got serious that this is how things work, here are the rules?…

Again, he was not a boy at the time. In fact, he was a few years older than Charles was when Charles began dating 18-year-old Diana. It seems inconceivable to me that Harry, who knew what his mother supposedly went through, would not prepare the woman he loved in advance, would not tell this “outspoken” woman Once you get involved with me, your outspoken days are over.

None of this should have come as a surprise to Meghan. She should have been prepared for and been ready to accept all of it. Obviously, her terrible boyfriend/husband allowed her to be completely blindsided after it was too late.

Meghan became something of a Royal Prisoner:

And I . . . and I remember so often people within The Firm [the monarchy] would say, “Well, you can’t do this because it’ll look like that. You can’t”. So, even, “Can I go and have lunch with my friends?” “No, no, no, you’re oversaturated, you’re every-where, it would be best for you to not go out to lunch with your friends”. I go, “Well, I haven’t . . . I haven’t left the house in months”.

I mean, there was a day that one of the members of the family, she came over, and she said, “Why don’t you just lay low for a little while, because you are everywhere right now”. And I said, “I’ve left the house twice in four months. I’m everywhere, but I am nowhere”. And from that standpoint, I continued to say to people, “I know there’s an obsession with how things look, but has anyone talked about how it feels? Because right now, I could not feel lonelier”.

Again, this is entirely Harry’s fault. None of this should have come as a surprise to her. Harry has literally spent his whole life dealing with the monarchy, so nothing should have blindsided his wife. Nothing. What’s more, where’s Meghan’s story about Harry fighting on her behalf so she can go out whenever she wishes? Where’s the follow-up tale where her champion raises hell, where he fulfills his primary role as a husband, which is to protect his wife’s happiness and well being?

My sense is that — if Meghan is telling the truth — Harry duped her. He didn’t want to lose her, so he never told her the truth about what her life would be like after things got serious, and, most especially, after she became a member of the family.

I’ve saved Harry’s most egregious  and unforgivable failure as a husband and man for last:

Meghan: I just didn’t want to be alive any more. And that was a very clear and real and frightening constant thought. And I remember — I remember how he just cradled me. And I was — I went to the institution [the monarchy] … And I was told that I couldn’t, that it wouldn’t be good for the institution. … And so, I went to human resources, and I said, “I just really — I need help”. Because in my old job, there was a union, and they would protect me. And I remember this conversation like it was yesterday, because they said, “My heart goes out to you, because I see how bad it is, but there’s nothing we can do to protect you because you’re not a paid employee of the institution”.

Oprah: Did you ever think about going to a hospital? Or is that possible, that you can check yourself in some place?

Meghan: No, that’s what I was asking to do.

Meghan: You can’t just do that. I couldn’t, you know, call an Uber to the palace.

Meghan: You couldn’t just go. You couldn’t. I mean, you have to understand, as well, when I joined that family, that was the last time, until we came here, that I saw my passport, my driver’s licence, my keys. All that gets turned over. I didn’t see any of that any more.

If this is true, while Meghan was in a suicidal spiral, her husband Harry, who knew she was suicidal and who is worth millions, did nothing! He just sat there and allowed his suicidal wife to be screwed around by bureaucrats.

Harry was so useless, he made Meghan do all the work to try and get help:

This was emails and begging for help, saying very specifically, “I am concerned for my mental welfare”. And people going, “Oh, yes, yes, it’s disproportionately terrible what we see out there to anyone else”. But nothing was ever done, so we had to find a solution.

Why in the world would Harry have his wife do all the work of getting help? Why is Harry’s wife writing these emails?

When your wife needs help, most especially if it’s something as serious as suicide, the husband’s job is not to say, Go talk to human resources. If that doesn’t work, send an email.

If my wife expressed suicidal thoughts, I don’t think I’m unique in saying no mountain would remain unmoved until she got the help she needed, and she would not be the one left alone to write the emails and make the calls.

From what I’m seeing, most of the post-interview criticism is aimed at Meghan. After reading the transcript, I certainly didn’t come away impressed with Meghan, but it’s the useless and heartless Harry who’s earned my true contempt.

If everything Meghan said is true, he is a breathtaking failure as a man and husband.