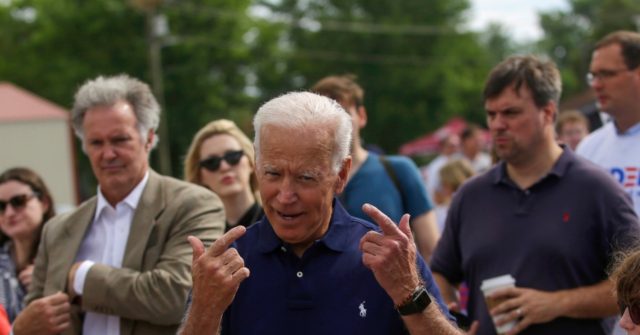 Former Vice President Creepy Joe Biden has collapsed to third place in Iowa and nationally, according to two polls.

Just a few days prior to last week’s debate, a national Change Research poll showed Biden leading the pack among his fellow 2020 Democrat presidential hopefuls with 24 percent support. Socialist Sanders and Cherokee Warren were not far behind with 22 percent.

But in a poll of 1,185 Democrat primary voters taken post-debate — between June 28 and July 1 — this same pollster now shows Biden has collapsed to third place nationally, with just 18 percent support. Warren is in first place with 22 percent and Kamala “The Buser” Harris is in second with 21 percent.

What is undoubtedly the most important number from this poll is the Harris surge….

Other than Yang, who doubled his support from one to two percent, and Warren and Paddy O’Rourke, who stayed even at 22 and two percent, respectively; everyone else lost support after the debate. Biden lost six points, Bernie lost five, Genius Pete lost three.

Harris, however, surged 13 points, from eight percent to 21 percent.

When asked who most impressed them at the debates, 69 percent chose Harris, 56 percent chose Warren, and Biden came in last place with just 15 percent. That put him behind Buttigieg (32 percent), Julián Castro (24 percent), and Sanders (23 percent).

When asked about the least impressive debate performance, Biden came in second (23 percent), behind only Oprah’s weirdo, Marianne Williamson (33 percent).

In Iowa, a crucially important state, the first where actual votes will be taken in early February of next year, one poll has Hair-Sniffer dropping to third.

The poll of 600 likely caucus voters (a more than respectable sample for that state) taken between June 29 and July 1, has the Fake Indian in the lead at 20 percent, Harris in second with 18 percent, and Biden in third at 17 percent.

The news is even worse for Bernie, who slipped to fourth place with just 12 percent support.

In this particular poll, Biden’s lead in Iowa has slowly withered away — from 37 percent in September, to 30 percent in December, to 25 percent in March, to 17 percent today.

Between March and July, Warren surged from eight percent to 20 percent, and Harris jumped from 9 percent to 18 percent.

One word of caution…

As of right now, as far as Biden losing his lead, these polls stand alone. You can even describe them as outliers. But there is no question Biden’s debate performance has put his inevitability in jeopardy.

In the five national polls taken after Biden’s June 27 debate, he leads anywhere from 19 points to 2 points.

In the Real Clear Politics average, his post-debate support dropped five points, from 32 to 27 percent, and he leads his closest challengers (a tied-up Sanders and Warren at 15 percent) by a still healthy 12 points.

There’s only been one other Iowa poll taken after the debate and it shows Biden leading by eight points with 26 percent. Sanders and Warren earn 16 percent and 13 percent support, respectively.

Biden, I think, has two problems…

His debate performance was dreadful. He allowed Kamala to beta male him in that exchange about busing, an attack he should have been prepared for. Democrat primary voters, especially the ones so fervent they are paying attention this early, only want one thing out of their choice, and that is a Trump Killer. Biden looked old, weak, unprepared, and caught off guard.

His second big problem, and this is the one the media won’t talk about, is that Biden is no longer the “sane” one in the group, the “moderate,” and therefore the most electable.

Over the last couple weeks, Biden has hugged many of the extremely insane positions held by his wacko counterparts, including taxpayer-funded abortions, gun confiscations, de-criminalizing illegal immigration, outlawing pretty much every gun manufactured today, putting an end to deportations, and giving illegal aliens government-funded health insurance.

In a very short period of time, the thing that had set Biden apart from the rabid pack vanished, the thing that would make him an acceptable alternative to Trump disappeared as he exposed himself as just another Democrat extremist.

This has undoubtedly cost Biden some support among reasonable Democrat voters, the good people who just want to beat Trump but have not lost their minds — those who do not want to flood the country with illegals and take away everyone’s guns.