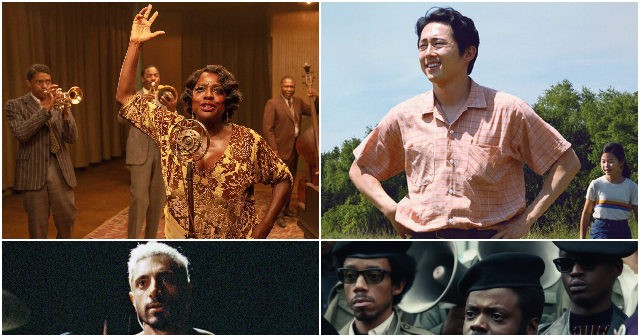 A poll of 1,500 “active entertainment consumers” shows that not a single one of this year’s Best Picture nominees has received any widespread public awareness.

Here are this year’s nominees and their awareness scores:

Personally, I have heard of all these. That’s my job… However, I’ve only seen one, Mank, which was terrible. I have access to three others — Judas and the Black Messiah, Trial of the Chicago 7, Sound of Metal — but they hold no appeal for me. I did get through about 15 minutes of Judas and the Black Messiah, but shut it off. Sure, I could watch them and review them (and maybe I will as we get closer to the Oscars on April 25), but after a while I get tired of writing negative reviews, of being so negative.

Back to the poll…

The thing to keep in mind about this poll is that it is not a poll of the general public. This pollster specifically sought out “1,500 active entertainment consumers — moviegoers, transactional home entertainment consumers and streaming consumers.” The question was a simple one: have you “heard of” or “not heard of” the following titles. So this poll has nothing to do with who saw these movies, but if people have simply heard of them.

Imagine what these numbers look like with the general public. Something a whole lot closer to zero.

If you’re wondering if this is a fluke, the new Tom & Jerry movie hit 88 percent awareness. Coming 2 America hit 75 percent. Bill & Ted Face the Music, a sequel no one asked for that went straight to streaming, beat all the Oscar nominees with 50 percent awareness.

How is it possible that during a pandemic year where people are locked down, stuck at home, and  streaming more than ever before, that the numbers are this low, especially for titles like Mank, Judas, Chicago 7, and Sound of Metal?  Those titles are not only available on Amazon’s and Netflix’s streaming services, they’ve been given massive promotion on those streaming services.

Well, there are a few reasons…

First off, the Oscars are no longer The Oscars. They are the Independent Spirit Awards.

Parasite? The Shape of Water? Moonlight? Birdman? The Artist? The Hurt Locker? Slumdog Millionaire???? Are you kidding me with this crap winning Best Picture?

I’m the biggest movie fan in the world and have not seen and have no intention of ever seeing Parasite, The Shape of Water, or Moonlight. The others listed above I have seen and wish I hadn’t.

Secondly, if you look at this year’s nominees, where are the movie stars? Anthony Hopkins, Frances McDormand, and Gary Oldman are all great, but come on… Other than The Guy From Walking Dead, who are these people?

Finally, The Woke Gestapo continue to kill movies, the American people know it, including “active entertainment consumers,” and as a result, we’re tuning out everything but the tried and true.

There’s a reason why aging sitcoms like Friends, Seinfeld, and The Office remain some of the most popular streaming shows. Unlike the shit being produced by the Woke Gestapo, these shows are old friends we can trust not to lecture and shame us.

Hey, remember when Oscars expanded the Best Picture category to ten titles in the hopes movies people have actually seen might get nominated? The whole idea behind that was to boost the humiliating Oscar telecast ratings. Well, how’s that working out for the Academy?

Last year’s Oscar telecast hit an all-time low of just 23.6 million viewers, a 20 percent collapse from the previous year. Until that point, the all-time low was 2018’s disastrous 26.5 million.

I’m sorry, but which titles are nominated has very little to do with why people do or do not tune in to the see the Oscars.

The allure of the Oscar telecast has always been the host and the promise of seeing elegant movie stars outside their natural habitat.

Well, as of late, the hosts have all been off-putting and unappealing, way too political. There’s a reason why, all the way back in 2008,  the overrated and divisive Jon Stewart’s Oscar hosting duties plummeted the show’s ratings to just 32 million; and then hosts Billy Crystal, Seth MacFarlane, and Ellen DeGeneres were able to bring the viewership back to 40 million viewers.

Today, though, no host is seen as appealing or trustworthy because everyone in Hollywood has surrendered to the Woke Gestapo.

The other problem with the Oscar telecast is that there are only about five true movie stars left in the world. The rest are pampered, mouthy, unattractive, overexposed celebrities we’re already tired of.

And America is not only avoiding watching this garbage, we’re not even aware of it because we’re tuning it out, we’re looking the other way, looking back to a time when Hollywood was filled with artists and artistry as opposed to assholes and their simple-minded propaganda.