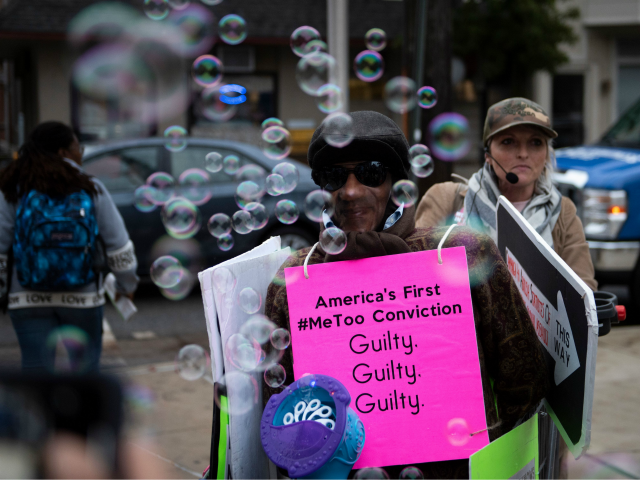 Snow was coming. A big snow. So I pulled over to talk to a couple of neighbor kids playing alongside the road. They had moved in next door over the summer and didn’t know the winter rules — that my yard is their yard, that they could sled down my front hill until their little hearts burst.

After cluing them in, I drove off and was then hit with a pang of fear. How did it look me pulling over, rolling down my window, and talking to a couple of little kids I barely knew?

Yeah, it was paranoid and the fear quickly passed, but I’m not sure I would do it again. Next time I might wave and keep driving. I suppose I could talk to the parents. Knock on their door, offer the invite. But how would that look?

No, no… Better we all seal ourselves off from one another in the Era of Woke, in the #MeToo era, where you are guilty until proven innocent — especially if you are a male conservative.

This is the world in which we now live, one where approaching others can destroy you forever, and I simply cannot imagine what it must be like for professional men who supervise or work with professional women.

On Wall Street, some men are avoiding women at all costs. Bloomberg reports:

No more dinners with female colleagues. Don’t sit next to them on flights. Book hotel rooms on different floors. Avoid one-on-one meetings.

In fact, as a wealth adviser put it, just hiring a woman these days is “an unknown risk.” What if she took something he said the wrong way?

Across Wall Street, men are adopting controversial strategies for the #MeToo era and, in the process, making life even harder for women.

If men avoid working or traveling with women alone, or stop mentoring women for fear of being accused of sexual harassment,” he said, “those men are going to back out of a sexual harassment complaint and right into a sex discrimination complaint

One suggested solution is tailor-made for our shallow cable news era: trite and snarky and an applause line for the Woke, but it is no solution:

Finally, he landed on the solution: “Just try not to be an asshole.”

You want to know who tried “not to be an asshole” his whole life? Brett Kavanaugh. And still women from his past, his high school past, came screaming out of the woodwork to destroy his career, life and reputation with false accusations.

“Try not to be an asshole” only works in a just world, and we do not live in a just world, we live in Woke World where evidence, common sense, and justice are considered inconvenient to The Cause.

The first person I ever promoted was a woman. Let’s call her Amy. I passed over three guys who had seniority over Amy to make her assistant manager, and I did so because she was smarter, more competent, and resourceful.

But in order to promote Amy, that meant one-on-one meetings, late nights where it was just the two of us at the store, and sometimes, because good time management requires meeting over a plate of food, we did that.

Amy was attractive, single, and liked to party during her off hours. I was her about-to-be-married boss. She worked out great and took my job after I moved on. She also ended up marrying one of her co-workers.

But that was 1987. That was before Clarence Thomas and Brett Kavanaugh and Rolling Stone and Mattress Girl and Duke-LaCrosse….

This was before our insane society and media empowered women to make false accusations.

And that is the problem… It is great that women are now empowered to tell creeps to back off. But come on… Women have had that power forever. Seriously, y’all, watch a Barbara Stanwyck movie and tell me again how women are only now empowered with this “agency” thing.

Regardless, this is still a good thing. I have a wife, sisters, granddaughters. So of course I want women to know they have the power to throw a drink in some creep’s face, to report a jerk who refuses to go away to human resources; and, yes, to gun down a dangerous stalker who finds his way into the house.

The bad  #MeToo stuff, though, is bad — and that is the legitimizing of false accusations, the end of the presumption of innocence, and most of that is driven by a craven media interested only in a narrative that results in a man’s scalp.

Even after a quarter century, even after Anita Hill’s testimony was exposed as ridiculous, even after no pattern was established by a second accuser, Clarence Thomas is still dragged through the mud by the media as a “sexual predator.”

And, my God, look at what happened to Kavanaugh. The allegations against him were ludicrous. But not only did our media treat Kavanaugh as a serial rapist, the media deliberately withheld information that would have cleared him.

Because of this reality, it is simply not enough to “not be an asshole,” not in a society that rewards mercenary women who choose the “correct” target to destroy — you know, like a frat house.

Because our Woke society empowers false accusations, because men like Woody Allen are destroyed even though two investigations cleared him, because even if you meet in a starkly lit coffee shop filled with people, you still cannot prove what you did not say, and this unfortunately means that “not be an asshole” is not enough, is no longer a safeguard.

So, given the same set of circumstance, would I promote Amy today? I don’t know. At the time, I didn’t give it a second thought. Today, I would have to give it a second, third, and fourth thought.

Men today are made to feel like criminals for being attracted to a co-worker. Welcome to sexual McCarthyism.

And so, men are now protecting themselves in the only way they can — by keeping their distance. You may not like it, it might not be fair to anyone, but who can blame them?

A return to common sense, due process in the court of public opinion, and ethical journalism would go a long way towards solving this problem, but I’m not holding my breath.